Formation Acro with the AeroShell Team 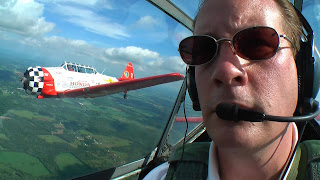 It took some maneuvering (of the logistical kind), but I got up on a flight with the AeroShell Team yesterday. 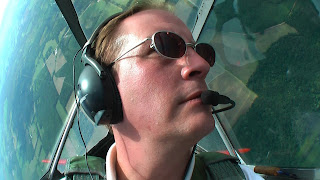 I launched with Brian Regan at around 4:00. We were going to do a one-ship flight so I could get a sense of that the T-6A’s granddaddy is like to fly. I was a little blue because I was looking forward to being in a four-ship flight, but that’s okay.

But, after a little maneuvering, we got the No. 2 ship, right wing Mark Henley, on the radio. Mark was inbound to arrive at the show and he joined up with us for a couple of maneuvers before heading back to the airport. 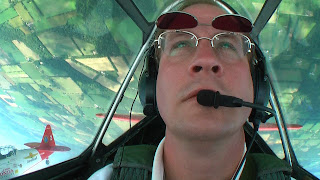 I hand-held the camera on this ride and it turned out to be good that I did. I was able to position it to capture the join-up and then Mark on the wing for the maneuvers.

I’m also heading over this morning after the briefing to see if they’ll fly a camera during the actual show today.

I’ll be doing a video episode featuring this material and you can probably expect to see it on WGVU-TV in western Michigan when its documentary on this year’s show comes out.

Off to volunteer with CAP for the day and then it’s back to the Airspeed patio for some more writing and editing tomorrow.
Posted by Stephen Force (Steve Tupper) at 9:04 AM