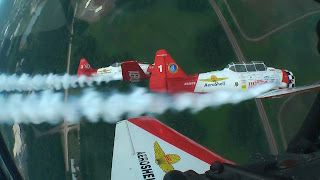 As I tweeted during the show, the AeroShell Team, in addition to giving me a formation acro ride on Friday, offered to fly the Airspeed camera during its performance on Saturday.

I’ll be turning these into an Airspeed video episode, but wanted to post s few frame grabs as well for everyone. Would have been cooler to ride along and shoot, but one can only hope for so much.

A pretty gray day and most of the photos were awful in terms of lighting. Almost all aren’t usable, so having the video is pretty helpful in telling the story. 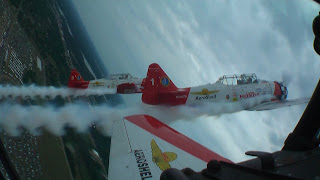 It’s always weird positioning a camera that you won’t be able to adjust later in the process. Especially on a taildragger that’s going to be a few degrees nose-down from its standing position once it gets the tailwheel up and flies. I took a guess at it and got the No. 1 and 3 ships (the AeroShell Team reverses the numbering for the wings with 2 on the right and 3 on the left) pretty well, except where 1’s smoke obscures 3. The slot aircraft comes into the shot at a couple of points, which was nice. Not a bad aiming job overall! 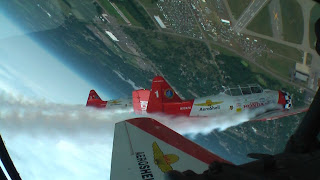 The light seemed to be best for the descending side of most of the maneuvers, like in this one. I’m in the picture there somewhere. 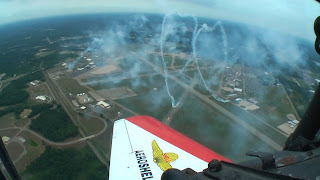 This shot was a little unexpected and pretty cool. The AeroShell Team does a squirrel cage maneuver that amounts to staggered loops or barrel rolls. The smoke looks pretty cool from the ground, but it turns out that it looks even cooler from the air. The aircraft had separated from the formation and Mark is maneuvering to rejoin. The camera caught this view of the smoke over the show line. 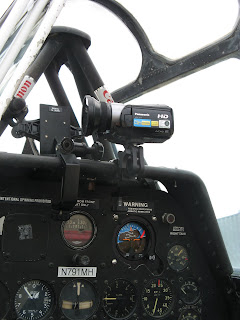 I mounted the camera in the No. 2 (Mark Henley’s) ship on the ramp at Duncan in the morning. Mark has a ball mount already in the aircraft, but it didn’t work for my mount. A couple of other mounting points proved suboptimal because of proximity to the canopy or the placement of the canopy reinforcements. So I mounted it on the dash pointing to the left. 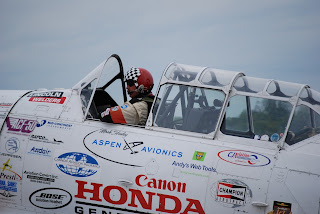 They then moved the aircraft out to onto Runway 13/31 for staging of the performers. I talked security into letting me out to the staging area to turn the camera on just before the flight and then I recovered the camera after the team came back in. You can see it behind Mark’s head in this shot.

Many thanks to the AeroShell Team for the opportunity to get up close and personal. I also got audio interviews that I’ll be releasing on the show soon.
Posted by Stephen Force (Steve Tupper) at 2:22 PM