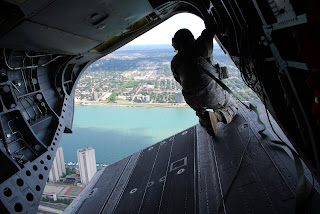 This is the a regular blog post. Please see the other posts if you’re looking for show notes or links to show audio.

Earlier today, I jogged across the pavement and up the tail ramp of an Army National Guard CH-47 Chinook helicopter. Strapping in, I got a 30 minute air tour of the Lake St. Clair and Detroit River shoreline and an idea of what it’s like to ride in this icon of rotary-wing flight.

First placed in service in the 1960s, the Chinook is a twin-turboshaft, twin-rotor helicopter that’s about 99 feet long and 19 feet high with a rotor disc area of 2,800 sq. ft. It’s powered by two Lycoming T55-GA-712 turboshaft engines that put out 3,750 hp each. It has a max takeoff weight of 50,000 pounds, about twice the aircraft’s empty weight. It’ll do 170 knots true, which is actually faster than most single-rotor ships. 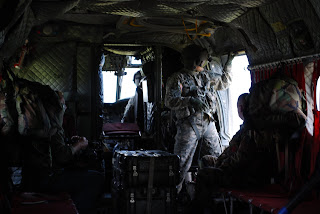 It’s huge. And noisy. They issued earplugs before I headed out and, unlike so many other media rides I’ve done, I needed them in the Chinook. It’s stinkin’ loud. And it rocks and vibrates enough to loosen your fillings. I didn’t even think about mounting a camera to the airframe on this one. There’s just no way. Not complaining, mind you. This is what I’m all about. It’s just that the aircraft could fragment your contact lenses by sheer sound pressure.

I strapped in on the left side in the rearmost seat near the cavernous ramp of a back door. The door stayed open the whole flight, which gave me a great opportunity to see sights, as long as they were behind us. Which is good by me.

The liftoff was so smooth that it caught me unprepared. The aircraft simply rose. Or perhaps Earth simply descended from below it.

Either way, we headed south at maybe 100 KIAS and 1,000 AGL. The flight engineers roamed around the aircraft, occasionally checking on systems and making sure that the riders had everything they needed. We did a wide turn over downtown Detroit and then proceeded back up the river on the US side back to Selfridge.

The flight engineer in the back spent a fair amount of time on the ramp in back, which gave me an opportunity to get him in the picture for perspective. He was tethered to the aircraft, but still closer to the edge than I’d be comfortable going, tethered or not. I guess you get used to it. 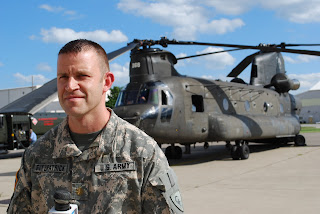 Upon returning, we hover-taxied back to the hangar. It’s pretty impressive the precision with which the aircraft can be positioned and moved down low. I guess I shouldn’t be surprised, but all that whirling hardware up on top just makes me think of it as chaotic in some way. In reality, it’s a very smooth machine in the ways in which it counts.

Afterward, I talked to the pilot, Maj Todd Fitzpatrick. He’s been an Army pilot for 16 years and flies the mighty Chinook regularly. He says it’s unsurpassed for moving big loads from point A to point B, whether in the roomy interior cargo area or suspended from the Chinook’s exterior load system. The more difficult phases of the job involve night operations. Today’s fighting forces have to own the territory in all weather, day or night. And that means ops with night vision goggles and other appropriate hardware and procedures.

The Chinook ride was a part of Selfridge’s air show and open house happening this weekend at the base. Gates open at 8:00 Saturday and Sunday. Admission and parking are free, so there’s no excuse not to attend. I'll see you out on the ramp!