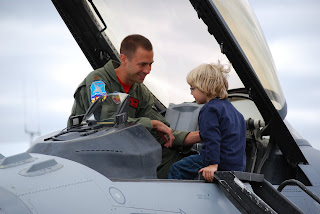 This is a regular blog post. Show notes and links to show audio appear in the other posts.

I considered just posting this picture and leaving it at that. Seriously. The major and the kid sitting there in the cockpit of an F-16 and talking about whatever. This Viper was there on the ramp and they were sending little kids up the ladder (yeah, the ladder and not the air stairs) for a moment or two in the cockpit with the driver. Pretty darned cool.

Day 1 of the Selfridge Airshow and Open House is done and it went over pretty well. Overcast skies most of the day and some of the performers had to flatten out their shows, but everyone seemed to enjoy it. If traffic was any indication, attendance is up at least 30-30% this year, similar to attendance figures for other airshows all over the country.

Having gotten most of my coverage done in the days leading up to the show, I left the house around 10:30. I hit the traffic backup at M-59 and I-94 and it was two and a half hours before I got to the ramp. Holy crap! Biggest objection is that the sergeant at the single-file choke point at the entrance to parking on the ramp was letting every other car or so stop and ask questions. I think that particular practice cost about 10,000 people an hour each of their lives. A butterfly flaps its wings on the ramp and traffic crawls five miles back down the line.

Not complaining. Just an observation. If you’re going tomorrow, get there early. If you’re not at M-59 and I-94 by 12:30, you’re not going to be to the flight line in time to see the Thunderbirds. I’m more delighted than most about the attendance. But, if I go back tomorrow, I’m hitting the media window at oh-dark-thirty and then taking a nap on the ramp under an F-16 until a more civilized hour. 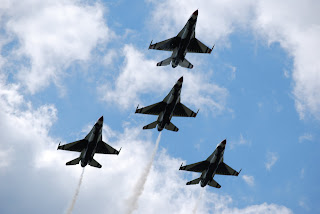 The Thunderbirds demo was great at usual. I think they flattened the show, but I can’t be sure. The converging maneuvers, especially by the diamond, are really breathtaking. And they’re flying in tighter formation. This is the latest in the season that I’ve seen them and they’re tight and close and spectacular.

Kind of weird hearing Maj Mulhare on the PA. I still think of his voice as issuing only from inside my helmet with a refrigerator sitting on my chest, watching the horizon appear from the top of the canopy of an F-16D. Not from PA speakers out on the ramp with all of these other people around. He’s the voice of my childhood dream fulfilled. Mine! Yeah, I know that sounds a little like something you’d see scrawled in Cheez Whiz (or worse) on the wall of the trashed hotel room after they finally apprehend the crazed stalker. It’s not that way, really. Just a little weird to hear that voice out on the ramp. Probably because I spent so much time editing that episode and, for all practical purposes, flying that flight. Thanks again, Maj Mulhare! That was a really special 1.0 ASEL, sir! It’s okay that you flew Colbert. His audience might be slightly larger than mine. 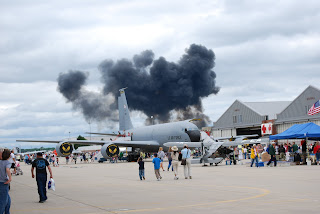 More pyro this year than I’ve seen in past seasons. Here’s a shot of the ramp with the flight line in the background.
This is a really deep show from the parking lot. It’s something like a mile (at least) from parking the car on the ramp to the show line. The parking lot is about a quarter of a mile behind me as I shoot this picture and you can see that the show line is most of a mile away. The first year I volunteered at the show (2005), I was driving a golf cart picking up mobility-impaired people at the gate and driving them to the crowd line. I was relieved in the afternoon and went on to do something else. I don’t remember seeing convoys of golf carts driving them back at the end of the show. I half expected to see their skeletons still out there in folding chairs on the crowd line when I went back to volunteer again in 2007. But all apparently ended well. 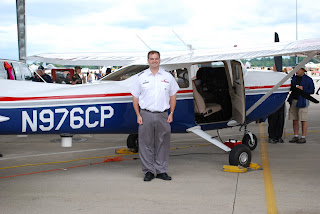 Here’s N976CP (CAPFLIGHT 2027), the Michigan Wing C-182T Nav III that I flew from Pontiac (KPTK) to Newberry (KERY), Traverse City (KTVC), and back to Pontiac this week. 6.3 hours of time toward the commercial, as well as three instrument approaches and a hold, making me instrument-current for a little longer.

That’s Capt Shawn Wyant, the commander of the Oakland Composite Squadron of Civil Air Patrol (my home squadron) in front of the aircraft at the CAP display. Capt Wyant was also the long-suffering flight release officer (FRO) for both the flight this week and a half dozen or so training flights that led to my successful Form 5 in the aircraft last month. In addition to that aircraft, we had the Gippsland, the glider, the ES trailer, and lots of other hardware on the field. A spectacular showing by CAP! Really prod to be a part of that organization. 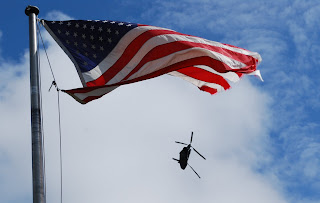 A semi-inspiring shot of the Michigan Army National Guard CH-47 Chinook in which I flew yesterday. Shot this from the McDonald’s just before the traffic goat dip this morning. Dave Higdon is right about trying to blur the prop whenever possible. He tries to shoot around 1/100th at the fastest to be sure that he gets a nice translucent prop disc in pictures. I shot this on auto into a bright sly and the camera probably set itself to about 1/100th. And I froze the rotors.

The CH-47, beautiful in its own way, is ugly to many even when the rotors are properly blurred. It’s ugly even to those who love it when you freeze the rotors like this. I need to learn my still camera a little better to say the least.

I have a pile of work to get done and will probably miss the show tomorrow. Some of that work includes finishing Goat Groove, the music to accompany the T-6A episode. I have great new studio monitors (Polk Audios) that are clean and deliver that canoe-paddle-to-the-face effect that I love so much when doing audio. Scott Cannizzaro would disown me if he know how loud I usually like it, but my ears don’t have to be the finely-tuned instruments that his are.

Get out to the show tomorrow. And get out there early! Gates open at 8:00 a.m. and there’s plenty to see and do on the field between then and flight time. Admission and parking are free!

Steve - would have to agree; that picture of the Maj and the youngster is a great shot and could have stood alone. Great post! Mike