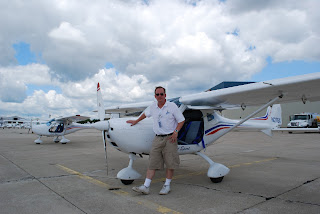 I went up for a demo flight in the Remos GX, a light sport aircraft (“LSA”) from Remos Aircraft. We launched from KOSH during a VFR arrival and departure window so, in addition to it being my first LSA flight, it was during a really busy time in the busiest airspace in the world.

Got to fly some of the en route and some steep turns. It was very responsive and climbed well (better than the 172s in the parallel runway and we launched past them handily).

I should have some better-developed thoughts about the flight soon. I’d like to get over to Hillsdale and fly a Flight Design aircraft before putting out the full episode because I need some perspective in the LSA category. And it’s been a week of extremes with the Cessna Citation Mustang at one end and the Remos GX on the other end. 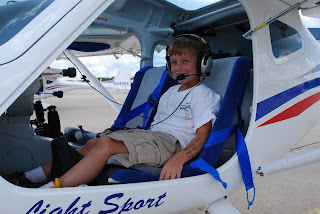 Cole waited patiently during the ride and I put him in the aircraft afterward for a picture or two. It’d be cool to take him up in one of these. Bet we’d have no problem with climb rate with only 260 pounds of Forces in the aircraft!

Got to get the boy to bed. Seaplane base tomorrow if I can get up early enough.

Posted by Stephen Force (Steve Tupper) at 1:58 AM

Are you a High wing Man? Did you check out the low wings at the show? Sting? Gobosh? Evektor?

I flew everything that was offered. Would love to have flown some others, too.