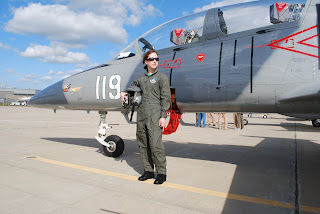 These are the show notes to an audio episode. If you want to listen online, please use the direct link below. http://media.libsyn.com/media/airspeed/AirspeedDavisL-39.mp3.

We’re very fortunate here in the Michigan Wing of Civil Air Patrol for a number of reasons. One of the best is LtCol Tim Brutsche, better known to some as “Dawg,” leader of the L-39 demonstration team, The Hoppers.

Here’s why. Tim offers a ride in his L-39 to any Michigan Wing cadet who completes CAP’s Spaatz Award.

The General Carl A. Spaatz Award is the highest award in the Civil Air Patrol cadet program. Think Eagle Scout and then some. It’s awarded to cadets who successfully complete all phases of the CAP cadet program and a final checkout consisting of a comprehensive leadership and aerospace education written examination, a graded essay, and a physical fitness test. The Spaatz Award is arguably the most difficult honor to earn in the CAP cadet program. Substantially fewer than one in 1,000 CAP cadets ever earn the Spaatz award.

C/LtCol Melanie Davis received her incentive ride at Battle Creek this summer during the lead-up to the Battle Creek Field of Flight Airshow and Balloon Festival. I was over at the Duncan Aviation ramp finishing up my own T-6 ride with the AeroShell Team at the time and managed to get over to Tim’s hangar to do the interview planeside with C/LtCol Davis.

I should note that the L-39 incentive ride is not a feature of CAP or of the cadet program, either in Michigan or anywhere else. It’s something that Tim offers out of his own personal commitment to seeing young people thrive in the CAP program and it’s conducted completely separately from CAP. I should also mention that there’s no particular guaranty that the offer will last for any particular time or be made available in any particular way. It’s all up to Tim and anyone with questions should direct them to him.

I think that this is a wonderful incentive. And I can’t think of a better program to which Tim might direct this particular kindness. If you haven’t yet considered joining and participating in CAP, you’re missing out!

Hey, LtCol Brutsche! You can have my oak leaves and I’ll start at C/Amn if I can have a shot at time in that beautiful jet!
Posted by Stephen Force (Steve Tupper) at 2:27 PM

very cool love the podcast. too bad i'm not a cadet