This is a regular blog post. Show notes and links to show audio appear in the other posts.

Yesterday started out as a CAP proficiency flight out of Ann Arbor. That is, until 1Lt Malek and I figured out that the aircraft was still in Lakeview getting its 100-hour inspection and that no one had mentioned this salient fact on the aircraft scheduling system. Bummage. Trip to Ann Arbor wasted, other than the fact that it’s always worthwhile to have breakfast with 1Lt Malek.

Not bitching about CAP by any means. This happens sometimes in any organization operated by humans. Just a little disappointing because I hadn’t flown since August and hadn’t flown approaches on round gages since April. The C-182T Nav III Form 5 qualifies me to fly the round-gage C-172s and 182s and I don’t actually have to demonstrate round-gage proficiency to a check airman if I don’t want to. But I’d be less than genuine about my commitment to safety and proficiency (and an idiot) if I failed to go out and fly approaches on round gages now and then to maintain proficiency.

Plus, I was only 1.6 hours away from completing my 50 hours PIC cross-country (greater than 50 miles) to qualify for my commercial certificate. I was hoping to get to Lansing for the approaches, which would have satisfied the distance requirement. 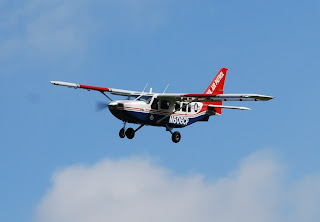 Crap. So I walked over to the ramp, where the CAP Great Lake Region’s Gippsland GA8 Airvan was preparing to take up some O-flight riders. I talked briefly with Maj Mario Accardo, the mission pilot, and then wandered to the approach end of Runway 24 to shoot a couple of photos of the Gippsland on final for the wing’s PAO library.

Fun, but – crap. I really wanted to fly some round-gage. I tweeted things to this effect. And, lo and behold, I get a tweet from Robert Ericson, ace KingAir pilot and CFII at Flight 101 at Pontiac, offering to go grab Flight 101’s C-172RG and head up for some instrument flight. How cool is that? It’s especially nice because Rob isn’t on the instructor schedule for the school but offered to go fly with me when I had the opportunity. He’s an Airspeed listener and had been really accommodating whenever I’ve been in to Flight 101.

So, a couple of hours later, we launched in N6274R, the school’s RG. I already had something like five hours in that aircraft, but wasn’t fully checked out in it. All of that was about to change.

Only failure on the prep was forgetting to set the transponder. And to get Rob his Scotch.

We filed IFR at 6,000 (to be assured of getting up into some of the cumulous clouds) and headed for Saginaw, a popular destination because of its multiplicity or approaches and its distance of a little more than 50 nm from Pontiac and other Detroit-area airports. Nice IMC on the way. Good clouds without a lot of convection or turbulence inside. Ragged tops at around 5,500 to 6,000 and bottoms between 3,800 and 4,000. Lovely in-and-out flying. The higher overcast kept everything mostly gray, but we got some nice sunlight on the tops at points.

I was really, really pleased about how my round-gage scan came back to me after more than five months. I’ll admit that I was too fixated on the attitude indicator in the early going, but I recognized that quickly. Several altitude excursions of around 100 feet, but generally pretty good.
See the track at http://flightaware.com/live/flight/N6274R/history/20090927/1730Z/KPTK/KPTK.

We shot the RNAV 32, then vectored around to the ILS 23. I landed beautifully. (Rob complained bitterly, but an elbow to the throat silenced him for the taxi to the FBO.)

We extended the time on the schedule for the airplane and then filed IFR back with an approach en route at Flint.

Same fun on the way back. http://flightaware.com/live/flight/N6274R/history/20090927/1900Z/KMBS/KPTK.%20. Wewere given V133 to POLAR and therefore flew that leg on the VOR with the GPS magenta line as backup. I made a perfect teardrop entry into the requested hold south on the Flint VOR, then did a full-procedure VOR 18 approach. For some reason, Flint Approach yelled at me about being below the vectoring altitude on the approach. The plate says I get 1,560 inside the applicable waypoint. I might have though that he was giving me grief because I was off the centerline for the approach, but I was only a dot off and correcting. Anyway, I climbed it up to 2,200 until the FAF and then hung out all of the junk (gear and flaps) and crowbarred down to the MDA of 1,300 before going missed and heading back to Pontiac.

Another spectacular landing at Pontiac on 27R. Full stall onto the mains six inches off the pavement and a gentle lowering of the nosewheel. 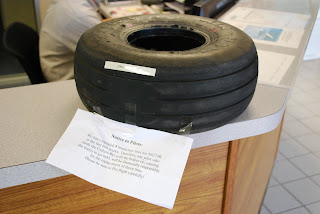 I couldn’t help but post this shot of a tire that’s sitting on the counter at Flight 101. Note the labeled “circle of shame” on the tire. I guess there’s been a rash of landings in the RG with one or more brakes engaged, this causing balding of tires. A good reminder to anyone, not just RG drivers. Keep your heels on the floor until you’re good and landed, folks. It’s an easy mistake to make and it’s a mistake that I’ve made myself. (No, I didn’t savage this tire . . .)

Many thanks to Rob for swooping in and saving what would otherwise have been a flightless day and a waste of good and very flyable IMC!

Lt Malek and I are going to head up later this week in the CAP C-182T Nav III to get him refreshed on the G1000 and keep me current. Should be a lot of fun!

Safety, currency, and proficiency. Good flying and good fellow aviators all the way around. One of those days when you’re particularly proud to be a pilot and when your training (and willingness to work to stay current and proficient) pays off.

I do so love this stuff!
Posted by Stephen Force (Steve Tupper) at 7:04 AM