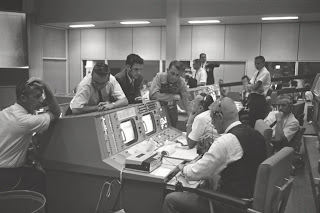 These are the show notes to an audio episode. If you want to listen online, please use the direct link below. http://media.libsyn.com/media/airspeed/AirspeedKranz.mp3.

On Friday, 27 January 1967, a fire destroyed the command module of Apollo 1, taking the lives of Virgil I. "Gus" Grissom, Ed White, and Roger B. Chaffee.

The subsequent investigation came up with, as is the case in almost any accident or incident, a cascade of causes. There are hundreds of thousands of pages of analysis, reports, and other documentary results of the investigation and subsequent changes at NASA and elsewhere. You can go read them at any of several depository libraries around the country. I’ve spent some time with some of those documents.

But, as with any event of this kind, one or two concise statements eventually rise out of the stacks of paper that encapsulate the event and give us the real lessons. The lesson from Apollo 1 that most stuck with me follows.

On the Monday after the fire, flight director Gene Kranz gathered his flight controllers and delivered the following. It has become known as The Kranz Dictum.

Somewhere, somehow, we screwed up. It could have been in design, build, or test. Whatever it was, we should have caught it. We were too gung ho about the schedule and we locked out all of the problems we saw each day in our work. Every element of the program was in trouble and so were we. The simulators were not working, Mission Control was behind in virtually every area, and the flight and test procedures changed daily. Nothing we did had any shelf life. Not one of us stood up and said, “Dammit, stop!”

I don't know what Thompson's committee will find as the cause, but I know what I find. We are the cause! We were not ready! We did not do our job. We were rolling the dice, hoping that things would come together by launch day, when in our hearts we knew it would take a miracle. We were pushing the schedule and betting that the Cape would slip before we did.

When you leave this meeting today you will go to your office and the first thing you will do there is to write “Tough and Competent” on your blackboards. It will never be erased. Each day when you enter the room these words will remind you of the price paid by Grissom, White, and Chaffee. These words are the price of admission to the ranks of Mission Control.
______________________

I don’t know how accurate that transcript is. And I’m not sure that I care. In any case, it’s a stern and accurate statement about how we should view what we do. In spaceflight, aviation, or anything else that balances the Big Dream with things in the absence of which everybody’d do it.

The whiteboard in my basement studio where I’m recording this has many words written one it. But two of them are “Tough” and “Competent.”

Apollo 11 landed on the moon just two and a half years later. It took a re-tooling of many aspects of the Apollo program, both mechanically and mentally. But we did it. And, when we finally sweep aside bureaucracy and things that don’t really matter, we’ll go again. And beyond.

And let us do so better, faster, longer, higher, and harder. We cannot eliminate all risk, but we can resolve every day to live by the Kranz Dictum in everything that we do. And let our courage to do these things find a true foundation in knowing that we have done things to a standard that would have received a knowing nod in mission control in 1969.

Nothing really worth doing will ever tolerate carelessness, incapacity, and neglect. The Kranz Dictum gives us a standard by which to measure ourselves when we do things worth doing.

Let us be aviators. Let us be spacemen. Let us explore.

Let us be tough. Let us be competent.

Photo: NASA. View of the Flight Directors console in the Mission Control Center (MCC), Houston, Texas, during the Gemini 5 flight. Seated at the console are Eugene F. Kranz (foreground) and Dr. Christopher C. Kraft Jr. (background). Standing in front of the console are Dr. Charles Berry (left), an unidentified man in the center and astronaut Elliot M. See. Available at http://tinyurl.com/yzbnfkg.
Posted by Stephen Force (Steve Tupper) at 8:00 AM

Thanks for your inspirational writing, Steve. I am currently training thanks in large part to the constant nudging from all you new media folks. In the light of all the recent examples of a lack of competence or letting judgment slip (to be very generous) we need reminders of this kind of attitude.
Randy
www.northernstudentpilot.ca

Brilliant and inspiring piece. Thanks for sharing it.

Brilliant and inspiring. Thanks for sharing it.