It's Not the Airplane, Man! 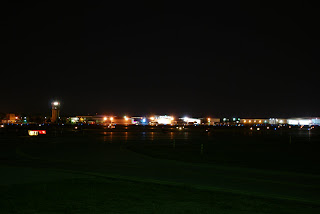 This is a regular blog post. Looking for show notes or links to show audio or video? They’re here! Just check out the other posts.

So it's late at night. And a Twitter follower tweets me with a link to Joe Sharkey’s High Anxiety blog. And I go read the blog entry in question. Crap. Did I mention that it's late at night? It is. I have way too much work to do. But I can’t let it go.

In his post, Joe asks, in relevant part, “Who [sic] do private aircraft, including corporate jets, some of which are the size of commercial regional jets and even 737s, get by without direct federal security screening before takeoff?” And he then goes on to suggest that DHS and TSA are going to take it in the pants politically for failing to adequately regulate GA.

Okay, I’ll trade in some sleep and rise to the bait.

Exactly what security procedures would you suggest? No background check of which I’m aware could possibly have revealed the threat that this guy is alleged to have posed. (Note that 18 of the 19 September 11, 2001 terrorists would have passed even an aircrew background check with flying colors.) No ramp security would have prevented what we saw in Austin today.

Smaller aircraft under most circumstances aren’t subject to TSA screening for a number of reasons, the most obvious of which seems to evade the American public: The elusive fact is that, as long as he was predisposed to do dramatic harm at the building site in the first place, this guy probably saved lives by using a general aviation aircraft. Any reasonable person should understand that using a GA aircraft is more difficult and less effective at the task of damaging a building or hurting people than much more easily obtainable things like a backpack or a rental truck.

I don’t want to belabor the point with a series of scenarios involving backpacks full of explosives or raise again visions of the April 19, 1995 bombing of the Alfred P. Murrah Federal Building in downtown Oklahoma City with a rental truck. And, lest my words be twisted, I’m by no means suggesting that anyone ought to bomb or damage anything under any circumstances.

The point is that a GA airplane is a wholly inefficient and overly complicated way to deliver any explosive. Or even blunt force. You have to get the plane. You have to know how to fly it. You have to be able to fly it with reasonable precision at high speeds. (I fly some aerobatics and I can tell you that it’s not as simple as it looks.) You have to navigate to the intended target. And you pretty much have to stay in the plane all the way to impact (leaving you, er, unable to do it again).

If your goal is to hurt people and damage property, that’s ridiculously complicated and unnecessary. No self-respecting terrorist would go through all this trouble if hurting people and damaging property was the goal.

Joe, if you fear actual loss of life and damage to property, you need to re-focus. It’s not the airplane, man! Sure, airplanes crashing into buildings are exciting and they make the news. But to focus on the airplane is to bury yourself and your readers in fluff and ignore the real issue. This guy would have been a lot more dangerous with a rental truck.

If you really care about what matters and are above racking up web page hits by making the easy sale to an already paranoid and ignorant public, let's address the actual issues and not use GA as a whipping boy.

We are a proud nation in which citizens can be jacks of as many trades as they can learn and competently practice. Where grocers, cops, letter carriers, lawyers, systems engineers, and neighbors can also be – by the sweat of their brows and the skills of their hands and feet – pilots.

If you feed irrational fears, you put at risk this core freedom. And, even worse, you divert attention from the real problem and help to delay and confuse real and genuine efforts to deliver meaningful security that addresses the real issues.

In the meantime, I’ll gladly walk through a scanner and go through the pat-down TSA-style when I fly GA.

Just as soon as you have to go through it to rent a truck.
Posted by Stephen Force (Steve Tupper) at 11:32 PM

I, for one, am in agreement that Sharky's post is nothing more than fear mongering. If he really wanted to discuss the subject, he would allow comments which, so far, he hasn't.

At the end of the day, no amount of TSA screening would have helped to avert this. Does the TSA look into our mood when we walk through those scanners? No. Unless he took a weapon or more than 8oz of liquid with him, they would have ushered him right through and said "thank you" to boot.

It is both sad and unfortunate that this happened at all. While we might not ever know the full reason why he did it, I suspect a mentally unstable merely made a political statement about the IRS wanting his property. It likely only made sense in his head.

You want my house? I'll burn it down.
You want my plane? I'll bring it to you
tough to collect if I'm dead and my stuff is gone.. take that IRS!

I'm not agreeing with him. Heck, I don't even understand how he could do it. I'm just putting forward a simple theory to the "why" in all of this.

Rather than spin our wheels enacting useless scanning techniques, lets put our energy into helping the victims and witnesses and families involved.

I was glad to see that this yahoo didn't make the front page in this morning's paper. I don't mind having a discussion of GA security, I just don't think it needs the full glare of the media spotlight upon it.

I was curious to see that the FBI didn't think that this was an act of terrorism. I'm not sure what criteria they use to reach that conclusion.

Nonetheless, your comments are spot-on, Steve. The airplane was unfortunately the vector for this guy's malice, but it was hardly the most effective one he could have chosen. I guess it's better that he didn't have an RV, which he surely would have packed full of explosives and detonated outside the building.