The Last Pure Thing on the Radio 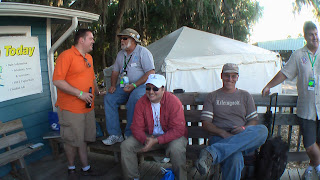 These are the show notes to an audio episode. If you want to listen online, please use the direct link below. http://media.libsyn.com/media/airspeed/AirspeedLastPureThing.mp3.

I’ve been volunteering with event-based airshow radio for three years now. I’ve really enjoyed working with guys like Dave Shallbetter of Sun ‘N Fun Radio, Fareed Guyot, Mike Morgan, and others from EAA Radio at AirVenture, Erik Utter from Arlington Fly-In Radio, and Don Costanza and others from FlightLine Radio. It’s a crew of dedicated people that really understands what the radio could be if it would dare. 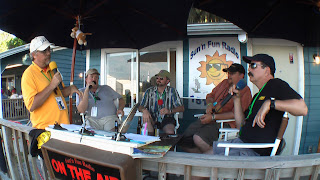 And I might add that the airshow stations have been great about opening their arms to podcasters. SnF Radio not only hosts the annual Gathering of Aviation Podcasters and broadcasts a couple of Uncontrolled Airspace episodes, but puts podcasters on the air right after the airshow each evening. EAA Radio has UCAP on the radio a couple of times a week and hosts Podapalooza, now entering its fourth year. Arlington Radio has been broadcasting bits of Airspeed since 2006 or 2007. Flightline Internet Radio has put podcaster promos on the air and over the Internet for years.

So last year, just before Oshkosh, I began mucking about with a tune in tribute to airshow radio. I fleshed out the tune and actually got around to recording it a few weeks ago and it’s ready to release. 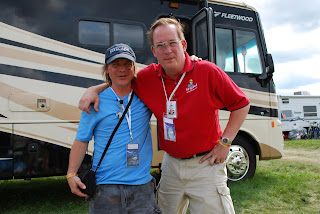 It’s called The Last Pure Thing on the Radio. I recorded the basic guitar, bass, and vocals at home and then went to The Soundscape Studio in Royal Oak, Michigan to lay down the drums. Then the whole ball of wax went to audio mastermind Scott Cannizzaro in New York for the professional treatment.

Scott not only mixed the piece wonderfully, he added some musical elements of his own. And he was able to get a college acquaintance, Chris Wormer, to play slide guitar on the track. If Chris’s sound is familiar to you, you might have heard his guitar stylings with The Charlie Daniels Band.

The artist name in the MP3 metadata is 7600, an informal band made up of music enthusiasts from around the country who collaborate remotely over the Internet. I generally release 7600 songs with the band name and then the specific folks who played or contrinbuted, so almost every 7600 song will show up as a separate artist on your player, but I think it's worth it to identify the particular humans who had a hand in the process. 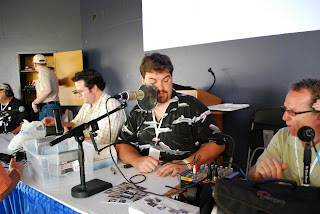 I’ll post a link to an MP3 download of the song on the Airspeed website so you can download it and enjoy it for personal, non-commercial use. I hope you like it. It’s dedicated to all of the volunteers that make airshow radio happen year after year.

So, without further ado, I give you The Last Pure Thing on the Radio.

I vaguely remember FM radio in 1968
Before The Man took it over and made it all blah-blah-blah.
And I remember watching the airplanes take off and land at Battle Creek and thinking
“Man, it’s going to take a long time to get the money and the guts to do that.”

And I heard somewhere that if you walk around at Oshkosh or Lakeland or Arlington
And you take along that same little transistor radio from 1968
Somewhere in the aether, there’s magic, love, and science
And some of it’ll spill into your ears if you let it.


Low-power AM and FM and carrier current and whatever
And temporary antennas that they roll out once a year
Sometimes it’s not easy to get a good clean signal
‘Cause there’s a hill in the way. Or a tree. Or a gum wrapper.

It’s like a dream where your best friends take over the airwaves
Throw out the playlist and just put on stuff that matters
And everything stops when a fighter jet come screaming through for a low pass
And there’s even dead air just then, but everybody understands.

I like it at airshows when they have a VFR arrival window
And a lone 172 is crawling in on short final
‘Cause I like to stand up and hold my cap over my heart while that 172 touches down
And I know you do the same thing.

So I stand at the snow fence pumping my fist in the air
And shout for John Mohr as he makes the engine sputter upside down
With that little transistor radio sticking out my back pocket
Picking up dead air at all the right moments.

Let the radio come carry me away
Posted by Stephen Force (Steve Tupper) at 5:17 PM