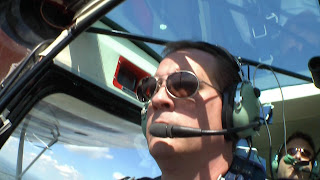 Beautiful day with 6,000 scattered and 10+ SM visibility. Yeah, I have a head cold, but cameras need testing and the acro tolerance needs extending. 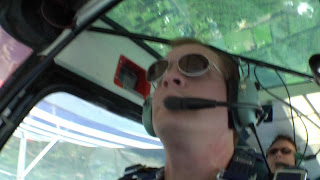 So I went up with Barry for 0.9 in the Super D to fly some acro and test out the cameras. Four of them on this flight. These frame grabs are from the Panasonic placed on the left side of the dash. More on the other cameras soon! 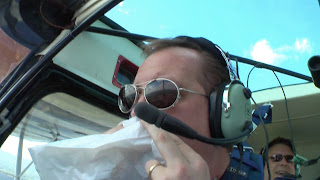 Being a little blue about the first couple of flights of the year (10 minutes and 12 minutes of acro, respectively) and wanting to pour on the coal to build some real tolerance for an upcoming Air Force ride, I pushed it to the limit.
And then some.
Yep. Airplane hurl no. 2. (The first was in a T-6A after about 1.2 hours and the full SUPT syllabus of maneuvers.) But that's okay. I'm good with that. You don't build tolerance by pointing the airplane back at the airport as soon as you feel a little green. You tough it out. And sometime you hurl. And then you tie a knot in the little white bag, stow it someplace where it won't float the next time you go negative-G, and keep on going.
Anyway, it's off to bed. Something like eight days until principal photography kicks off for Acro Camp and there's lots to do before people start showing up.
Posted by Stephen Force (Steve Tupper) at 11:18 PM

Fantastic shot! Glad to see you kept the boom mike out of the bag, one of my recent passengers wasn't that lucky.

Talking about cameras, could you tell us a bit more about your setup whenever you have time? Do you use any on-lens filters for example?

Wow! I thought you were just teasing me about throwing up in the airplane! Nice meeting ya the other day-Victoria

Do you have any suggestions for the low budget pilot who wants video/audio data from a flight?

@Mark: a $40 intercom cable plugged into an iPhone works OK for recording sound as mp3. For video, you can go with a $200 flip mino camera and a suction mount. Alternatively, a recent digital camera should be able to record good enough video.