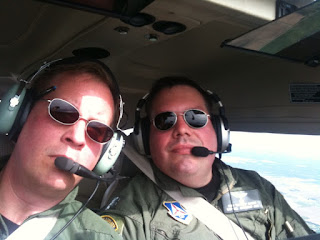 So Rod Rakic calls me up a few weeks ago. Seems we have an opportunity to go check out the B-2 Spirit bomber at Whiteman AFB. Cliff, a mutual friend, had kindly offered to give us a tour of the facilities and get us close to the mighty Mach 0.95, 335,500-lb. Heavy stealth bomber.

To make it even more epic, Rod arranged for an Illinois wing CAP C-182T Nav III to make the trip from Chicago Executive (fka Palwaukee) (KPWK) to Whiteman.

When we got together at KPWK and sat down to brief the mission. A band of precipitation sat between us and our objective. No getting around it, really. It was all green and yellow, but non-convective as nearly as we could tell. Ceilings between 800 and 3,000 and tops between FL180 and FL250. It was clear that, if we were going to make this trip, we were going to be in the crud for a good portion of the flight.

Both Rod and I are qualified CAP pilots in the G1000-equipped bird. We’re pretty good operators – Rod perhaps more so than me. The issue now became whether to go launch into weather that we both knew that the bird could handle and for which both of us are well-trained, but that neither of us had experienced first-hand. 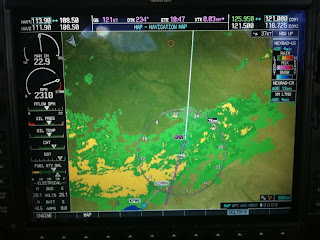 It was like a Dick Collins video. Planning to go launch into the soup for an extended period.

I’m a reasonably cautious guy. Old and bold pilots and all. I plan to be old. So’s Rod. I’ve talked with him about go/no-go decisions a lot in the past. We’re both conservative. But we came up with a “go” for this mission. Capable bird. Two qualified pilots. Weather thick but non-convective.

So we launched. We got into the soup well before Moline at 6,000 MSL. Then we hit the precip. Green on the XM satellite radar. Then yellow. Then green again. We gave the airplane a good bath.

And we were rewarded with a smooth flight and a beautiful phase between an undercast and an overcast. One of those great feelings you get when you train for something and then have success when you go out and actually experience it. 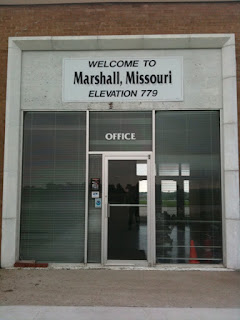 Then circumstance frowned upon us. We had been watching some convective activity near Whiteman, but it appeared that it would blow over by the time we got there. But the red stayed near the base. And then ATC called us up and told us that the Whiteman tower was evacuating because of a tornado in the vicinity. No good for Whiteman.

So we looked at our alternate, which was near Whiteman, but also close to the thunderboomers. With the help of the G1000, we identified Marshall Memorial Airport (KMHL) in Marshall, Missouri and shot the RVAV 18 to a smooth landing. The field was well above minimums, but it was scattered and ragged with a frond in the area and we stayed IFR through landing, then called up flight service to cancel.

As we taxied to the ramp, our eyes were greeted by the glorious sight of a CAP van parked outside the terminal building. It’s assigned to the Marshall Composite Squadron, which is based there at the field. A couple of phone calls later, we were meeting with the squadron’s commander and getting the keys to the van to drive the last 50 miles to Whiteman.

As we drove, lightning lit up the skies and low and dark clouds rolled overhead. Rail came down in varying amounts. Like all good pilots, we rehashed the flight and the decision to divert. I think we did a pretty good job of being situationally aware, being nimble and flexible to deal with the weather, and using good CRM to optimize cockpit operations.

Channeling Dick Collins for the first time. Flying through the soup and letting nature wash the airplane. This is the payoff for a lot of hard work. Now down to the hotel lobby to meet Rod and go see us some bombers!
Posted by Stephen Force (Steve Tupper) at 8:29 AM

That's cool! Whiteman AFB is about 40 miles away from me.