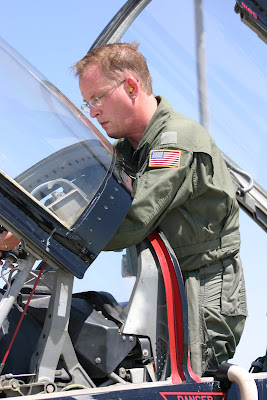 This is a regular blog post. Please check out the other posts if you’re looking for show notes or links to show audio or video.

The adrenaline rush from the T-38 ride at Beale has subsided just enough that I can sit down and begin to rationally inventory the content that we captured on the trip. I spent part of this afternoon going through some of Mark LaCoste’s still pictures. While Mark was primarily handling video, he also shot some really good stills.

I flew four cameras on the sortie – three mounted and one hand-held. Here, I’m mounting a couple of ContourHDs. You can see the GoPro HD Hero through the glass just opposite where my belt buckle would be if I was wearing a belt. I had given a lot of thought beforehand about where to mount the cameras, so the mounting and setting took only about five minutes. The crew chief was really helpful, too, in selecting where to put the hardware. 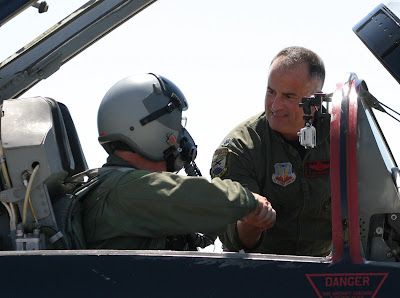 Here, LtCol Gary MacLeod finished checking out my harness and making sore that nothing in the back cockpit becomes FOD. (Yeah, you pay close attention that. You do engine start and taxi with the canopies open for ventilation. The intakes are just abeam the rear cockpit and anything loose in that cockpit will instantly be ingested into the engines. Which would matter greatly even if the engine weren’t 50-odd years old. And, even though they've been overhuled many times, they're - well - 50 years old. 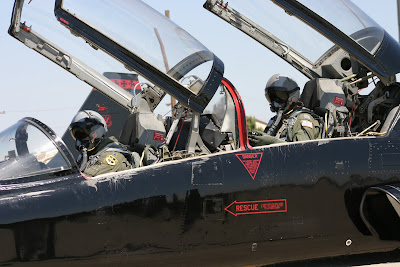 Getting ready to go. I’m setting up the audio recorder. 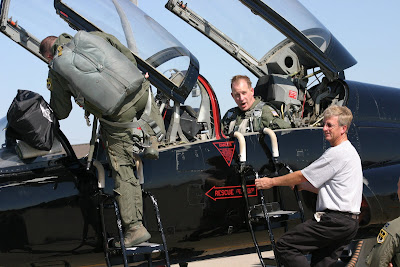 I’m really excited about this episode. Can you tell? Contrary to prior practice, I think I have enough video – and it’s strong enough stuff – that I think this is going to be an all-video treatment. I’ll likely do an audio treatment as well on some of the more meta aspects of the flight, but this feels like a video thing. More soon as I get the rest of the inventory done and start writing the script and figuring out what other on-camera narrative input I need to film here in Michigan.

Can't wait to see the next post. So where did you end up mounting the other three recorders?

Wow,
Lucky guy,my local aerobatics team are pretty good check out the Blades on 2 Excels site in UK.
Regards
Tony Weaver "One who grew up under SACB47s in UK"
ps what do you think of our Avro Vulcan ,now on the airshow circuit?