Acro Grass: Crowdsourcing a Piece of the Acro Camp Soundtrack 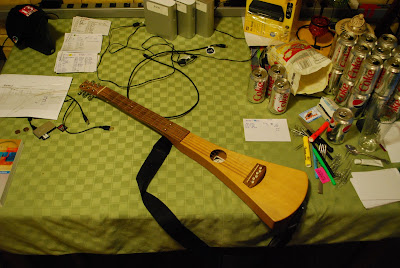 There are the show notes to an audio episode. You can listen to the show audio by clicking here: http://traffic.libsyn.com/airspeed/AirspeedAcroGrass01.mp3. Better yet, subscribe to Airspeed through iTunes or your other favorite podcatcher. It’s all free.

Hi, guys. Lots going on. I’m editing material from a balloon flight, a T-38 sortie, an episode on how to hurl in an airplane, and lots of other stuff. Lots more aviation content coming your way soon. But lets take a quick detour to talk about the movie.

Unless you’ve just subscribed, you know that the movie, Acro Camp, is in post-production. We’re all awestruck by aerobatic flight. We wonder what it’d be like to fly upside down for the cheering kids.

At some point, you quit wondering, climb over the fence, and go find out. Four pilots. Two men and two women. Experience ranging from 300 hours to 12,000 hours. None of them had a tailwheel rating and none of them had flown any appreciable aerobatics. We took over a Part 61 flight school for five days this spring and those pilots flew aerobatics for the very first time. We loaded up the airplanes with HD cameras and digital audio systems and had cameras roving around the ramp and the pilot lounge to capture the entire experience. And now it’s coming to a DVD player, film festival, or side of a barn near you.

I also did one other thing this evening in the studio and I think you’re going to like the concept. Maybe even enough to participate.

The aviation podsphere is one of the most open, inviting, and collaborative places in cyberspace or any other space. Everybody who can make it sits down together twice a year to record a live episode together. Even the Aussies bend over backward to be there, even if only virtually. We often appear on each other’s shows. We get input from audience members and fans and fellow aviation enthusiasts. Sometimes, we even turn the mic over to them. Were it not for Airspeed, I wouldn’t know half of the people that I now call my best friends.

When I announced that I was going to make a movie, I had two instructors, two airplanes, and a vision. I hung my credibility out there and asked you guys to join in. Then I sat back and sweat blood until I got at least four applicants.

I needn’t have worried. I got 51 applications from all over the United States and Canada and an utter embarrassment of riches in trying to narrow down the cast to Jim, Lynda, Michelle, and Paul. People volunteered and came from California, Florida, Indiana, New Hampshire, and Michigan to handle cameras, swap cards, and cover the experience. People flew and drove from Iowa, Pennsylvania, Illinois, and other places just to hang out.

The film has been a collaborative and social enterprise from the very beginning. So I though I might try getting even more involvement from those of you whose imagination this project has captured.

How’d you like to help out with the soundtrack? Yep. That’s right. I’m going to crowdsource at least one of the grooves on the soundtrack. Here’s how it’s going to work.

As many of you know, I usually write and record groove-based music for my audio and video episodes. Same thing for the movie. Repetitive, groove-based music that sets a mood and is engaging, but rides under the action and augments it without overpowering it.

I came up with a basic theme on my Martin Backpacker guitar about six months ago and it’ll be one of the themes that I use for stuff that happens on the ground. (By the way, I’m planning to have all of the music on the ground be in 4/4 and all of the music for the aerial sequences be in 3/4 or 6/8. Thus, this is in 4/4.) I’m including a bit of the theme here in this episode so that you can listen to it. It’s just a basic illustration of the theme and it’s very imperfect. It’s not the final version and I’m almost certainly going to re-record it for the soundtrack.

It’s called Acro Grass for the moment, mainly because it has a bluegrass feel and the Martin Backpacker guitar sounds very banjo-like when I play it. It’s in the key of D major and the tempo is 116 bpm. I recorded it with the Backpacker with a DADGAD open tuning like I used in Theme from Milliways (which you heard in the First Solo episode in 2006) and The Lake Parker Arrival (which you heard in April of 2008). Both pieces have made appearances in trailers to A Pilot’s Story as well.

I’m including the theme at the end of this episode so you can hear it. If you hear something about at theme that speaks to you and you’d like to contribute, here’s what you do.

Download one of the extended versions from the show notes for this episode at http://www.airspeedonline.com/. I’ve posted two of them: One with a click track and one without. Each runs a little almost 12 minutes, so you’ll have plenty of time to sit and jam to it and come up with your own additions.

When you’ve come up with your contribution, record it and then send it to me in electronic form. All I need in the early going is an e-mail to steve@airspeedonline.com with an MP3 or a link to where I can download your file and listen to it.

If I like it and want to incorporate it – or think I might – I’ll likely get in touch with you and get a permission from you to use it. Basically, you’ll represent and warrant that it’s your original work, you’ll agree to indemnify everybody associated with the project against third-party infringement claims, and you’ll grant a non-exclusive license to use your contribution in the movie, in the soundtrack CD, and otherwise. I’ll mention you in the credits and you’ll get to brag that your stuff made it into a movie.

And, if I can pull it off, I’d love to do something like put a picture of you up when your part is featured while the music plays during the credits, along with a notation of the instrument you play and what you fly. That would reveal some of the people who made the music to which the audience has been listening throughout the film.

In any case, I’m not in a position to pay for your contribution. That’s kind of why I’m calling it a contribution. I’m already about $10,000 into the project, not counting the hundreds of hours thus far. In the exceedingly unlikely event that the movie actually recoups its production costs and I can start paying people for their stuff, I might tickle your mailbox with a little something. But no promises. Don’t count on anything.

Some other notes of importance. What I’m looking for are short sequences and snippets that I can loop or otherwise incorporate into long and varied amalgams of the general tune appropriate to dropping into the film at strategic points. I’m not looking for a complete 11-minute opus that runs alongside, or incorporates, the track that I’ve provided. Don’t make a career out of it. Just bits and pieces that I can remix and assemble. Musical Lego blocks.

You don’t need to go into a fancy studio and you don’t need top be running Pro Tools to make this happen. Any reasonably good recording that’s on pitch and in time will be fine. Even if all you do is listen to the guide track in your headphones, play along while recording, and then send me the good parts, that’ll be fine. I’ll take it from there.

By the way, I got the idea from the Playing for Change videos. If you haven’t seen them, please hit YouTube and watch a few. And contribute money to Playing for Change for the work that it does. My favorite is Stand By Me. It starts with street musician Roger Ridley in Santa Monica, California and then dissolves to Grandpa Elliott and Washboard Chaz in New Orleans and then to other musicians around the world. None of them had met in person at the time, but the guys who made the videos put the parts together in post to make a cogent and beautiful presentation of the music. I want this tune to come together along those lines.

And note that each of them just listened to the guide track in their headphones and played. Use Pro Tools if you have it, but the musicians from Playing for Change did just fine without it. You can, too.

There’s no guarantee that your music will be used at all. And, if it does, I might twist and repurpose it in strange and beautiful ways, whether by adding effects, pitch-shifting it, increasing or decreasing the tempo, cutting it, augmenting it, and what have you. As with the Acro Camp campers and IPs, you’re going to have to trust me.

When you submit your stuff, do it in an electronic file. WAV is preferred. High-resolution MP3s will do in a pinch. Make it high and dry with no reverb or other effects. If there are multiple instruments, separate them one per file. Don’t send a mix unless it’s to illustrate a particular thought about placement or some other element and you’re sending the separate instrumental track as well.

The following things strike me as potentially interesting to include. (Not essential, but they’re what I’m hearing in my head when Jeb Burnside isn’t in there.) Wordless female voice, something like Enya or Cirque du Soleil. Strings like violin, viola, cello, or bass. Flute or whistle. And banjo. And, if you can make it work, trombone. Kent, this means you have to play in four sharps, but I think you can handle it.

I suppose that this is also a good time to indulge one more fantasy here at Airspeed. That fantasy is that Bela Fleck, Chris Thile, Jerry Douglas, Edgar Meyer, Mark O’Connor, Jordan Rudess, Tony Levin, John Petrucci, Mike Portnoy, Geddy Lee, Neil Peart, or Alex Lifeson listen to the show. Or that someone who knows the foregoing gods of musical motor skills listens to the show. And that one or more of them shoots some tunage my way. C’mon, guys! I’d almost take that over an opportunity to land a crippled 747 with the STS orbiter on top of it.

Anyway, here’s that theme: Acro Grass. Extended versions for use as guide tracks to record your bit: