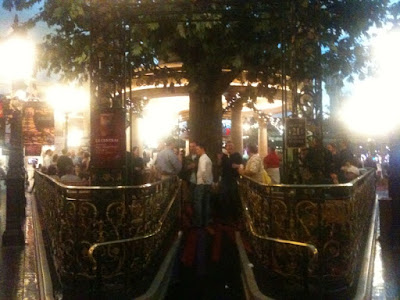 There are the show notes to an audio episode. You can listen to the show audio by clicking here: http://traffic.libsyn.com/airspeed/AirspeedLeCentral.mp3 . Better yet, subscribe to Airspeed through iTunes or your other favorite podcatcher. It’s all free.

There’s a garden bistro in Paris called Le Central. It’s at the foot of a cobblestone street. A wrought-iron fence surrounds it and creates an eddy in the flow of strolling sight-seers. Not unlike a cross-section of a symmetrical wing placed in the middle of a busy thoroughfare.

If you walk by Le Central, pay attention. Listen to the bits of conversation that drift into the street. Look at the faces as they appear and disappear behind the climbing vines that embrace the place.

If you stroll into the bistro, you find that the bar is round and that the patrons circle it gradually in either direction with a kind of unpredictable Brownian motion. They greet each other loudly or softly. With embraces, with insults, with shouts. Drinks are spilled and wiped up. More are poured.

As you make your way through the milling patrons, it becomes dreamlike. You tap a man on the shoulder to ask if you can squeeze by. As he turns to let you through, he smiles and says hello. And you see that he’s CAPT Greg McWherter, Boss of the Blue Angels.

You’re embraced unexpectedly from behind and you turn to see that it’s Haley Werth, who has just lunged out from a knot of people that includes Billy and David Werth.

The gathering around the bar is a couple of people deep and the guy who hands you your beer over their heads is Randy Henderson. Mike Goulian walks by. On another occasion, you might see Scooter Yoak or Julie Clark or Aaron Tippin.

You happen to be standing next to a guy as you order another beer and you discover that he paid for it even though he doesn’t know you from a stack of hay. And even though he’s Jay, better known as “Face Shot” from Speed and Angels.

The dreamstate continues for hours. You walk among your heroes. You talk to them. They talk to you. You’re uncomfortable because you try to keep your fanboy nature contained. And you fail. But it’s okay. You’re all speaking a common language.

Time becomes fluid. It’s always early evening at Le Central. It’s as though the sky has been painted that way.

And, in fact, the sky is painted that way. Le Central, and Paris for that matter, is in Las Vegas, Nevada, the site of the annual convention of the International Council of Air Shows, or “ICAS.”

For a few days each December, everyone who is anyone in airshows gathers in Las Vegas to train, book acts, be booked, debrief the recently-completed season, and plan for the next season. The jet teams announce their schedules for the upcoming year or years. And – my favorite part – everyone touches home again.

During the season, airshow professionals are spread out across the country every weekend. They’re flying, talking, separating traffic, rigging systems, and parking cars. But, in early December, they get the chance to come together in one place. And, when a community that’s as tight-knit as the airshow community comes together after a year of being spread out across a continent, it’s a homecoming of both epic and intimate proportions.

This is my second year at the ICAS convention. I really enjoy the exhibit floor and the breakout sessions. But my favorite part, bar none, happens every evening at Le Central. I get to move in that waking dream several evenings a year. I’ve flown with a small but growing number of these people. I’ll fly with more of them as time goes on. I admire each of them mightily. And, though I’m by no means the shooter that any one of them is, I’m beginning to earn their respect as a mediator of their performances to you, the airshow faithful.

I purposely don’t record audio there. I don’t take pictures other than the distant shot that accompanies the show notes of this episode. Performers and others can relax among others of their kind and leave their public personae elsewhere. Everybody’s a fan of everybody else. There’s an unspoken declaration that you can say what’s on your mind. It’s a very special place.
I’m all about capturing these experiences and sharing them with you guys and audio, images, and video of the experience are frequently the best way to do that. But Le Central is different. I look at it like a quantum mechanical phenomenon. If you try to measure or capture it too precisely, it’ll fall out of quantum superposition and become ordinary. Erwin Schrödinger and Douglas Adams would understand ICAS.

The sky over Le Central in this version of Paris is just painted on. But that’s okay. I’m willing to suspend disbelief. I’ve stood under that sky for hours in a perpetual spring evening and stood at the elbows of my heroes. It’s one of my favorite places to be. And I’m going back there tonight.