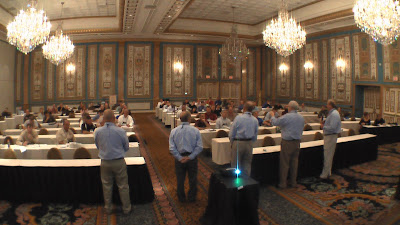 This is a regular blog post. Looking for show notes or links to show audio or video? Please check out the other entries.

I spent most of the day today in Airshows 101, a seminar that acquaints new airshow staff with many of the issues and processes associated with putting on a great airshow. Basically a day in a room with five of the nation’s best air bosses: Ralph Royce, George Cline, Larry Strain, Bill Snelgrove, and Dick Hanusa. These guys have been doing this for decades and they have something like 150 years of experience among them.

I’m chuckling at myself as I write this Sunday evening in the hotel room. I figured that a whole day would be enough to write an episode on the fly based on the information in the seminar. Yeah. Right.

The seminar is kind of like one of those highlight reels that they show Navy pilots of botched carrier landings. Lots and lots of talk about what can go wrong at an airshow. From weather to parking problems to slips and falls to raging drunks to midair collisions. It might just make you think twice about putting on an airshow. But the underlying message is that this is a doable thing with a lot of work and a lot of advance planning.

The printed materials are something like 50 pages of PowerPoint slides. And many of them are pretty dense with content. I do want to do an episode on this, but it’s not something I’m going to get done here in the hotel room. Even with more time, the best I’ll be likely to do will be to give a sense of how much stuff there is to do. But maybe that’s enough. In any case, I have a renewed respect for the people who put these things on year after year. 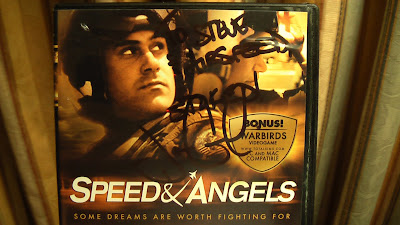 I also got a chance to meet up again with Jay “Face Shot” (and, more recently, “MJ”) Consalvi, one of the two Navy pilots featured in the 2008 Peyton Wilson documentary, Speed & Angels. I met Jay at Le Central last year, but I didn’t really know who he was and I hadn’t seen the film. I picked up the DVD after getting home and have since become a fan.

I tracked Jay down at the reception this evening and played fanboy for a few minutes, during which I got him to sign my DVD.

I’ll probably go orbit around the bar a few times and then hit the hay. I’m not going to be flying my desk tomorrow or Tuesday, but that doesn’t mean that it won’t be straining at its tie-downs. I’ll try to keep my body on Eastern Time and get a couple of things done in the morning before the sessions start. But then it’s back into the world of ICAS.

Posted by Stephen Force (Steve Tupper) at 12:31 AM