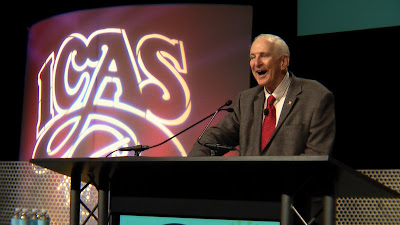 These are the show notes to an audio episode. You can listen to the show audio by clicking here: http://traffic.libsyn.com/airspeed/AirspeedICASJohnson.mp3. Better yet, subscribe to Airspeed through iTunes or your other favorite podcatcher. It’s all free.

I just got out of the ICAS morning keynote and announcement of the jet team schedules for upcoming shows. Although I don’t very often run stuff in the show that’s mostly or entirely other people’s comments, I couldn’t help but think that you guys would enjoy this.

They keynoter was Congressman Sam Johnson of Texas. A retired Air Force colonel, Johnson flew the F-86 Sabre in the Korean War, the F-4 Phantom in the Vietnam War, and the F-100 Super Sabre as a member of the U.S.A.F. Thunderbirds.

While flying a mission over North Vietnam, he was shot down and taken prisoner. He spent seven years in a North Vietnamese prisoner of war facility, three and half years in solitary confinement.

I love the fact that they used to start Thunderbirds demos with a sonic boom. I never knew that. I wish they’d do it again. And a lot of the other material that I heard in this presentation and otherwise made me pine for a simpler and more energetic time in aviation. I know that the current environment (regulatory, practical, and otherwise) is a lot safer and perhaps presented better in some respects. But a big part of me wonders what it would have been like covering these guys in their airshow heydays. 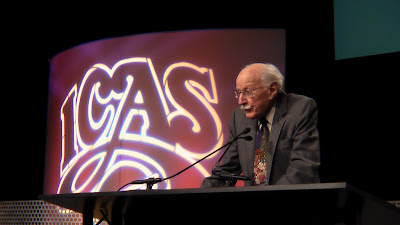 Bob Hoover introduced Mr. Johnson and I had the brief opportunity to meet them before things got going. Gracious and engaging, both. Genuine aviation royalty. Just another indication of how surreal it can be here at ICAS walking among legends.

This just became one of my favorite Airspeed episodes.