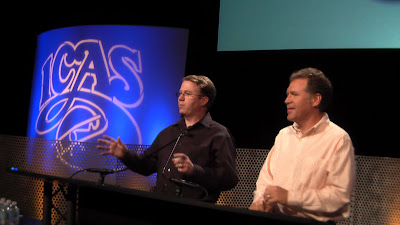 This is a regular blog entry. If you’re looking for show notes or links to show audio, please check out the other entries.

To crib shamelessly from the film’s website, Andrew King and Frank Pavliga “steered their planes toward a dark green plot of alfalfa on a dairy farm and landed to take some pictures, just for the fun of it. Matt Dirksen, the farmer, thought he had just seen two planes crash in his field, and went over to investigate. Andrew and Frank quickly made up a story about engine trouble. Almost immediately, they heard the approaching shouts of excitement from two young boys, and a slightly suspicious Matt himself. The past was suddenly reborn. In the old tradition, the pilots treated the boys to their first flights. Matt and his wife invited the pilots to come back someday for a home-cooked meal. The pilots returned the next year bringing a few friends with their own airplanes, and a new tradition was born.”

The film tells the story of the gathering in the context of the ninth such gathering at the Dirksens’ farm. With lots of aerial footage and an emphasis on letting the people come alive in their own words, the film captures the magic of what can happen when general aviation meets the non-aviating public. 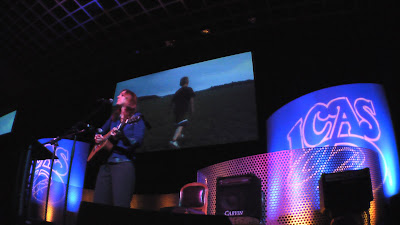 Bryan and Paul introduced the film, Suzanne performed part of the music live, and all three did the Q&A afterward.

The film was shot over the course of four days split between two years of the event. Fortunately, the weather was nearly identical each year and, if there are continuity problems, I didn’t see them and they don’t interrupt the story. 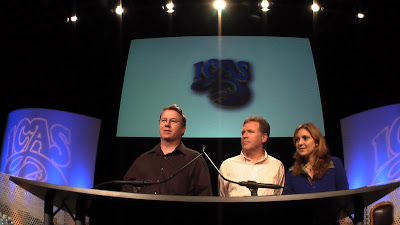 With a film of my own allegedly in the can and much editing to do before it’s ready to go, I did more than my share of interrogating Paul and Bryan, both on the floor of the ICAS exhibit hall and at the showing. Paul in particular has been wonderfully forthcoming with the good, the bad, and the ugly.

There’s a growing network of aviation filmmakers. Much like the podsphere, these people freely share and help each other out. As Paul is quick to point out, the audience for these films will buy any decent film that comes out. The primary market is a focused and rabid group of the aviation faithful and it would be nearly impossible to saturate that market. There’s room for everyone and more than enough stories to tell.

I’ll be heading home with plenty of motivation to get Acro Camp edited. Don, Barry, and I go into the studio on Friday 17 December to record some of the music. I have everything I need to at least put together the trailer, so I think that’ll be out soon. And I’m sorely tempted to call in sick for most of January to really lower myself into the well. But that’s the kind of thing that makes one extraordinarily lucky, isn’t it? To have a big, honking, wonderful project to work on and people who want to see it when it’s done.

We already know that pilots are extraordinary people. I guess it follows that aviation filmmakers would be more of the same. It’s sure true of these folks.

Posted by Stephen Force (Steve Tupper) at 1:18 AM