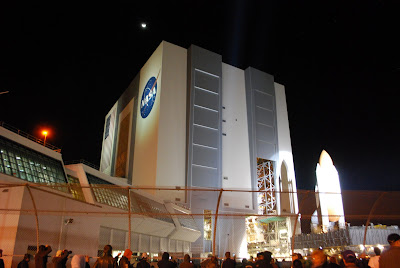 This is a regular blog post. If you’re looking for snow notes or links to show audio or video, please keep scrolling. It’s all right here!

How many times should one try to start a blog post before giving up on erudition and just writing something that poses a grave danger of sounding like a fifth-grade book report? The number is at least three, but it’s greater than the number of tries that I ultimately made before writing this.

I normally head down to Jekyll Island, Georgia each march to visit my folks, who spend two months there each winter. About every other year, I detour to Kennedy Space Center to feed my space monster. I need to touch home there on the Cape to recharge the batteries.

I was thinking about that awhile ago and called up Mike Robinson of the Starfighters to see if he might want to drink such beer as I might buy upon passing through. Mike, ever the considerate guy that he is, suggested sliding my schedule to the left by a week to include the TICO airshow here at the Space Coast Airport. And, being that the Starfighters have a NASA connection, he allowed as how I might be able to see some of their operations there at KSC.

Say no more. I moved the dates and came down this weekend instead of last weekend.

And then, by happy chance, it happened that the roll-out of STS orbiter Endeavour for STS-134 was slated to occur this evening. Long story short, I spend a bit of this evening at the VAB watching Endeavour roll out to Pad 39A. 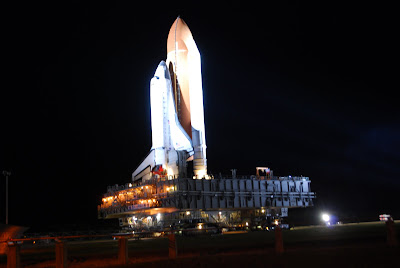 The launch assembly crawls out of the VAB and then hits the gas and begins to move at a more blistering mile-per-hour pace. Once it’s well and truly out of the VAB, the spotlights illuminate it and it stands out in dazzling white.

The parking lot is full of people. Most, like me, are shooting pictures, babbling like kids, or drooling. It’s going on 9:00 at night, so just about everyone on this side of the fence is here because he or she wants to be here. Everybody’s a fanboy and it shows. 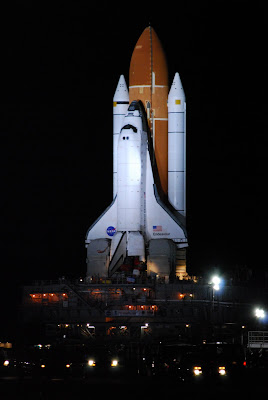 STS-134 is a run to the ISS to deliver the Alpha Magnetic Spectrometer (AMS) and spare parts, including two S-band communications antennas, a high-pressure gas tank, additional spare parts for Dextre and micrometeoroid debris shields.

Also, as matters stand, it’s slated to be the second to the last STS mission. Which makes it bittersweet to see it roll out. Discovery just landed from its final flight yesterday. So everyone is aware of the era ending. 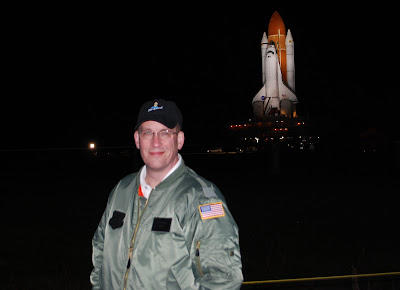 I suppose that I shouldn’t be bothered as much as I am. I’ve always been the first guy to complain that the STS has given us a space pacifier that has kept the public’s mind off the fact that our manned space program hasn’t left low earth orbit since 1972.

But the STS has been the county’s flagship space program for most of the time during which I was growing up so, like it or not, the STS has a place in my heart. It’s weird to see an orbiter recede into the night like that.

There are much more profound things to say about this evening. Probably in some larger context and in more concise form. For the time being, I think it’s probably enough to acklowledge how grateful I am to the Starfighters for the access to the rollout and the chance to see the great lady up close. And to walk among a crowd of people that is just as excited as I am about being there.