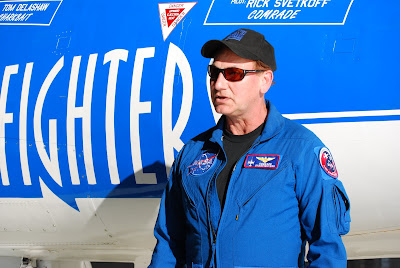 This is a regular blog post. Need show notes or links to show and video? Keep scrolling. It’s all here!

I spent Friday at the Valiant Air Command TICO airshow at the Space Coast Regional Airport in Titusville, Florida. I went primarily to meet and hang out with the Starfighters, who operate the Lockheed F-104 Starfighter. My primary objective was to shoot the F-104 and get a couple of interviews to use on Airspeed and for Acro Camp.

That meant being there most of the day with the team there on the ramp, which is actually in the aerobatic box for the show. Oh, no! Please don’t throw me in that briar patch! How ever will I cope!

So, whenever nothing was happening with the blue-and-white Century Series jet, David Allen and I shot the rest of the show in both stills and video. The only downside of shooting from the ramp was the fact that the showline is positioned so that you have to shoot up-sun. I can’t really complain about that, but it did result in most of the usable shots being of those performers with more to-and-fro (as opposed to back-and-forth) elements to their demos. 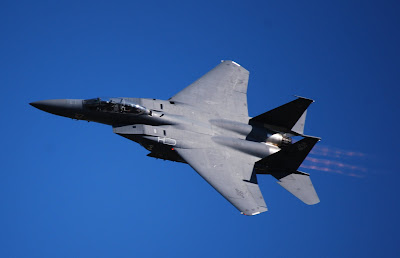 Take, for instance, this one of the Maj Mike "Cash" Maeder and Capt Steven "Buda" Bofferding tearing it up in the F-15E. Great noise and great three-dimensionality to the demo. And, although I could be mistaken, it looked to me as though there’s a lot more inversion and a lot more high-G maneuvering in this year’s routine. 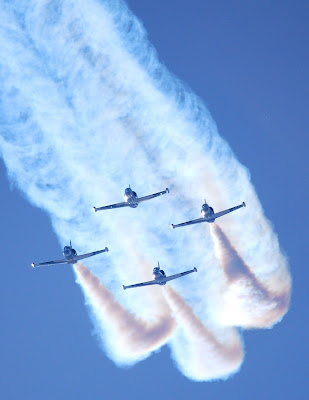 Because of the aforementioned geometry of the show, the remainder of the shots are heavily weighted in favor of the Heavy Metal Jet Team, which flew its inaugural demos this weekend. 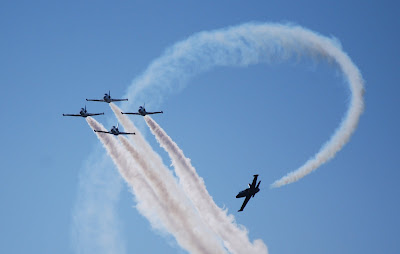 This one probably benefited from the geometry. It’s still pretty up-sun, but I don’t think that one could shoot down the length of the solo’s barrel roll from any other angle. 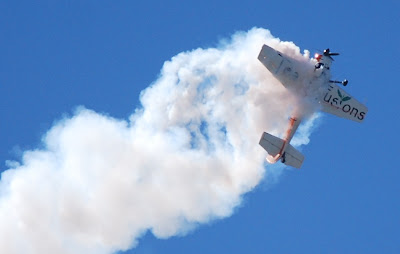 Among my new favorites is Mark Sorenson, who flies a Yak-55 named Titus that’s painted in tiger livery. Mark embraces the playful presentation of the airplane and he loves to show off the airplane to kids.

Dave and I helped Mark wipe down the aircraft after he returned from flying and I had a chance to talk to him at length. We met initially at ICAS in December, but the proper place to hang out with a pilot is on the ramp or in the hangar while scraping bugs off the leading edges of a pretty airplane. I’ve maintained a loose correspondence with Mark’s brother, who’s an F-15E driver at Nellis AFB. I frequently wish that my family was a little more aviation-intensive like the Sorensons.

Mark operates ground-based smoke-ring generators that put huge black smoke rings up into the box that he then flies through. I didn’t get to see the smoke rings on this occasion, but I’ve seen the video and I’ll bet that it adds a more three-dimensional feeling to his presentation. Mark doesn’t fly many shows to the north, where I am, so I doubt that I’ll get to see him fly at another show. But you never know.