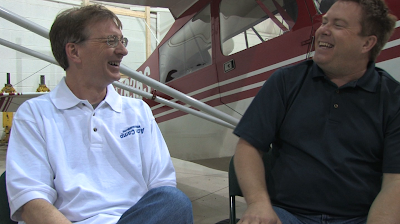 These are the show notes to an audio episode. You can listen to the show audio by clicking here: http://traffic.libsyn.com/airspeed/AirspeedAcroCampDonBarryDebrief.mp3 . Better yet, subscribe to Airspeed through iTunes or your other favorite podcatcher. It’s all free!
After the props stopped turning for the last flights of Acro Camp, I took Michelle Kole back to Detroit Metro for her flight back to California. While I was gone, DP Will Hawkins sat down instructor pilots Don Weaver and Barry Sutton to debrief after five days and 41 sorties.
This is the audio, essentially unedited, from that debrief. 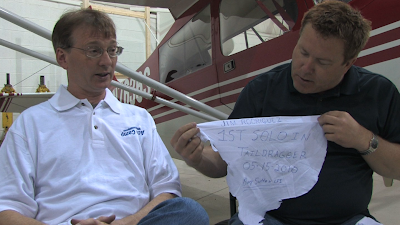 Neither Don nor Barry had done a camp as intensive as this in some time. Both were ready for some rest. But both remained energetic about what happened at the camp. Each felt that he had made a difference in each pilot's life and flying skills. Each was impressed at the transformation that each pilot experienced. 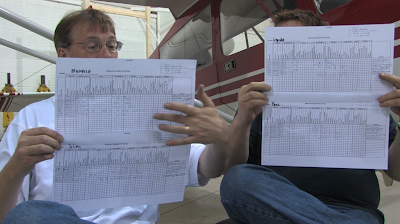 Will initially planned to ask questions to keep the conversation going. In fact, all he had to do was say "So how did it go?" and adjust the camera once. These guys laid a rope 25 minutes or more long that was every bit as poignant as anything that any camper had to say.
It's a privilege having guys like this with whom to shoot a movie. And, for me personally, it's amazing that I get to go fly with each of them with some regularity.
Stay tuned for an announcement about Acro Camp II. It's tentatively planned and don't be surprised to hear a casting call go out some time in the next few weeks!
Posted by Stephen Force (Steve Tupper) at 12:01 AM