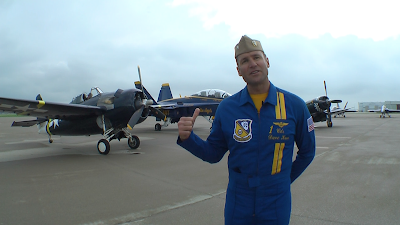 This is a regular blog post. If you're looking for show notes for audio and video episodes, you've come to the right place! Just scroll around and you'll find 'em!
I'm almost decompressed from the weekend. Saturday at Indy, I was invited to head over to Indianapolis International for an interview with CDR Dave Koss, Boss of the Blue Angels. They had lined up an F-4U Corsair, an FM-2 Wildcat, and an F/A-18D Hornet (Blue Angel jet No. 7) on the ramp as a backdrop highlighting the Centennial of Naval Aviation ("CONA" for short).
I did my best to ask some nonstandard questions, but Boss is both well-prepared and enthusiastic. I asked him how all of the aircraft behind him were . . . wait for it . . . the same. He didn't skip a beat. "The Naval Aviators who fly them." And he's dead right.
It was a short interview because it was raining and the Wildcat and Corsair had to beat feet back to indianapolis Regional (KMQJ), where they were on static display. But it turned into a really good three or four minutes that I'll likely edit into an episode for the show. I might also try to grab a piece of it to use in Acro Camp. 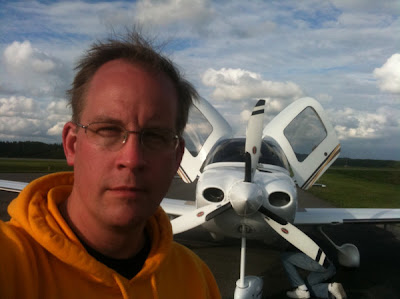 The remainder of the weekend was also pretty epic. I got home around 0400 local on Sunday morning. After a reasonably full day of domestic bliss, I met up with Don Weaver at Pontiac (KPTK) and proceeded to knock out my long commercial cross-country by repositioning a Cirrus SR22 (N711CG) from Pontiac Raleigh-Durham (KRDU) via Mansfield, Ohio (KMFD) and Upshur County, West Virginia (W22).
We were inside the eggshell from about 1,200 AGL off of KPTK all the way to KMFD. We shot the ILS to 300 feet in actual with a stiff crosswind from the right. Later, we broke out of the clag and had some fun poking through fat, ragged cumulus piles most of the way to W22. We cancelled IFR and landed at W22 for gas.
It looked as though we'd be able to stay above the mountain ridges and below the clouds the rest of the way to KRDU, so we departed W22 VFR and had an amazing time navigating through the valleys and over the ridges using a sectional. The peaks were around 4,000 MSL and the clouds varied from 4,500 to 6,000. Plenty of room to stay legal both above and below. But it's the kind of flying that makes you really work on your SA and keep all of the back doors available in case you round a corner and find out that the next cloud and the next peak are in contact.
We landed at KRDU and buttoned up the airplane. Then we did an almost equally epic 13-hour dash back to KPTK in a rental car. We traded driving duties and whoever was the PND took on DJ duties, digging into the deepest depths of his iPod to introduce the PD to the best of the best in music and motor skills. Don went out and immediately bought Chris Thile's Not All Who Wander Are Lost after we returned, so I was reasonably successful in my PND shifts.
Now it's back to the grind. Lots of interesting clients with interesting work. But I also have only a 100nm night cross-country to go in the aeronautical experience department to go, then it's polish the maneuvers, get the written out of the way, and I'll be ready to take the commercial checkride.
Back to the trenches! Ttere's a movie to edit and Battle Creek is only a few weeks away!
Posted by Stephen Force (Steve Tupper) at 9:28 PM