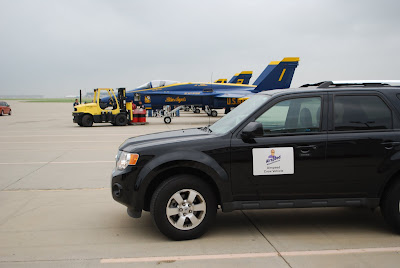 This is a regular blog post. If you're looking for show notes to audio or video episodes, they're all here. Just keep scrolling!

The Airspeed crew vehicle likes to think of itself as Blue Angel Zero. There she is, parked next to CDR David Koss's No. 1 ship. Waiting for the crew to top up her smoke oil for tomorrow's demo.

Day 2 (Saturday) at Indy is complete. Worries about the weather were worth having, but - at the end of the day - not worth getting bunched up over. Ceilings started out high and gradually came down. The Blues flew a low or flat show, which was fine with me because I was on my way out to Indianapolis International to catch a photo op with CDR Koss and the pilots of two WWII-era predecessors of the F/A-18C. I opened up the sun roof so I could hear the jet noise better.

The shoot went well and I got a three-minute piece that I might release as an ultra-short video episode. 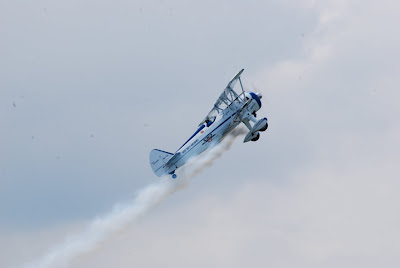 I love Dave Dacy's big, honking 500-hp Super Stearman. It's clean, it's white, and it's round. It makes the right noices. You can attach a human speed brake to the top wing. What more do you really need? 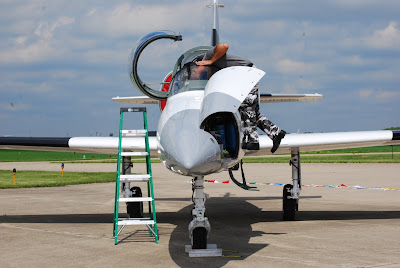 I hooked up with the Heavy Metal Jet Team in the late morning and got interviews with Snort and Slick for Acro Camp. The interviews look very crisp in HD. And they should. As long as the light doesn't completely stink. you have an airplae that the team has gone to the trouble to paint with large areas of the three most useful background colors. Don't like how the frame looks? Not popping? Take two steps to the left and you have a completely different contrast proposition. Three to choose from. No waiting.

Both Slick and Snort are very, very well-spoken. Great answers to the questions and a sincerity that you can't fake. Having interviewed about a dozen airshow performers for the movie, I have begun hearing substantially the same answer from multiple performers to the same question. It's to be expected. There's probably a limited universe of answers to the same core four or five questions. But both Snort and Slick had new, different, and dead-nuts-on things to say. I had to remember that I was asking questions and not just sitting in my living room watching the movie.

I'm writing this at a Steak n Shake a couple of miles from Indianapolis International. I just offloaded the day's still pictures from the camera and sent a couple off to the media folks at the airshow. Now it's back on the road for Michigan. There's an SR22 at Pontiac that needs to get to the Carolinas and Don Weaver and I are just the guys to take it there!
Posted by Stephen Force (Steve Tupper) at 6:38 PM