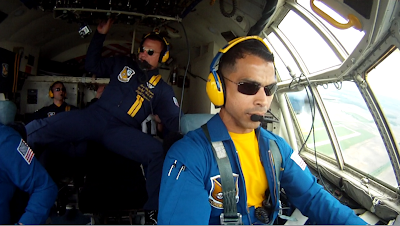 This is a regular blog post. If you're looking for show notes to a video or audio episode, you've come to the right place. Just keep scrolling. It's all here!
The Blue Angels are back again at the Indy Airshow. And that means that the ubiquitous blue and gold C-130, Fat Albert, is on the field supporting the Blues and thrilling spectators. And fanboys like me.
Fat Albert is operated by an all-Marine aircrew. I had the opportunity once again to ride on Fat Albert. The first time (2009) was great. But I learned a few things that allowed me to prepare much better for this ride.
For one thing, I showed up with five cameras. Four were small clampable models (two GoPro HD HEROes and two ContourHDs) and the fifth was the trusty Panasonic for handheld use. I checked in with GySgt Ben Chapman when we arrived at the aircraft staging area and he was kind enough to point out some good mount points. Two in the cockpit and two in the back.
The best footage is from the cockpit camera, a frame grab from which appears at the beginning of this post. There's a fair amount of vibration, but what mount in a C-130 doesn't vibrate when you're yanking and banking as much as this one did during the demo? Have you ever wondered what it looks like in the cockpit during the demo? Yep, that's GySgt Chapman floating at the top of the climb-out as Capt Edward Jorge pushes the yoke full forward after a 45-degree initial ascent. 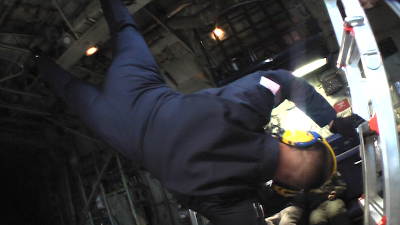 I sat further aft than last time and I'm glad I did. The guys in the back do this all the time and are pretty good at knowing the flight profile and when they're going to be at zero-G. And taking advantage of it. The shot above is not photoshopped. It's the real deal. I got it from my seat with the hand-held. He has a good grip on the ladder and the ladder is firmly secured to the cargo deck. But it's still pretty dramatic-looking.

The main camera for the rear compartment was up on the front bulkhead looking back. It's rock-solid and doesn't vibrate. I'll pull some frame grabs from that one and post them soon.
And, because all of the cameras ran the entire time, I'm going to synch them up so that the video episode is able to cut among the camera angles to giver you a pretty good idea of what it's like to be among the pax on Fat Albert Airlines.
Thanks much to the crew of Fat Albert and to the Blue Angels! Watch for the video episode coming soon!