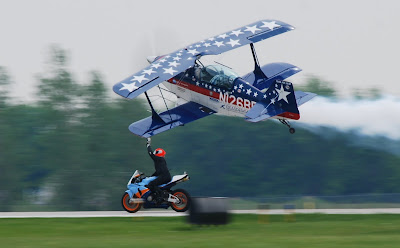 This is a regular blog entry. If you're looking for show notes to a video or audio episode, just scroll around. You're sure to find it!
Yeah, it's my favorite time of year again. I'm a little blue as I find myself in mid-May and not out at the Aviation Station shooting a movie. I miss my Acro Camp crew more than I thought I might. But there's nothing like an airshow to take the edge off of that particular blueness.
Indy is one of my favorite shows. This is my third year covering it. It's at Indiana Regional Airport (formerly Mount Comfort) (KMQJ), which has excellent surroundings that offer performance lines that can accommodate almost anything you'd want to fly in the airspace. It's reasonably accessible. Firebase Airspeed this year is at the Super 8 in Greefield, which is only a few miles to the east. But for the construction on the main highway that has things down to one lane for much of the going, it's easy access. And I'm getting to the show around 0700 each morning, so it's no big deal for me.
I spent most of the day shooting cameo interviews for Acro Camp. I re-shot the Billy Werth interview that I did last year (the audio was unusable) and added fellow Red Eagle Dan McClung, hang glider pilot Dan Buchanan, Super Stearman pilot Dave Dacy, and wingwalker Tony Kazian.
And I shot as much of the practice flying as I could. Most notable was Billy and Dave Werth's Sibling Rivalry demo. Billy flies a Pitts S-2C (in which I've flown with him) and Dave rides a ridiculously powerful motorcycle. The act initially involved racing down the runway. But it has evolved since then.
Billy and Dave are now doing a lot of formation performing. In the lead shot to this entry, Billy heads down the runway and Dave reaches up and grabs the wing. And today, for the first time that anyone can think of, Billy flew inverted ahead of Dave and Dave was able to grab the tail of the Pitts. Pretty precise stuff on the part of both pilot and rider! 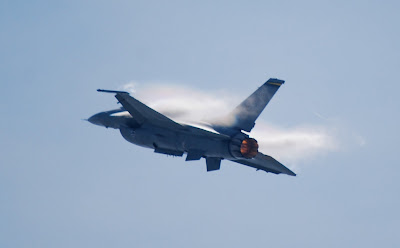 The Viper West F-16 Demo Team tore it up very nicely. Although ti wasn't terribly hot, it was pretty humid. And that meant huge blankets of moisture cascading over the wings of the Viper at almost any positive angle of attack. The sky was pretty gray and the circumstances weren't great for shooting either video or stills. And, let's face it, I mostly do audio or close-up video. But the 200mm Nikon rig yields up competent images from time to time. The above wasn't the best representation of the Viper that I've ever captured, but you can see the burner and there are huge clouds on the wings. Good enough for me!
Capt Garrett Dover cranked the aircraft around very convincingly. The tight-turning capability of the aircraft continues to amaze me. It just rolls over and cranks around at +9G for a full circle. You're always sure that the Viper is going to bust the 1,500-foot line coming back around, but it never does. That's just unbelievable pull! 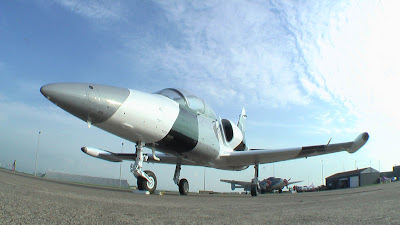 I'm still chasing the Heavy Metal Jet Team for a couple of planeside interviews for Acro Camp and the podcast. I was close to Jive and Rook during the briefing in the morning, but had to leave early to interview Billy, then lost them. Heavy Metal does a lot for the Make-a-Wish Foundation and I understand that the team was engaged in taking care of some commitments along those lines. That's fine. I still have tomorrow before heading back to Michigan.
I'm planning to ferry a Cirrus SR-22 from Pontiac down to the Carolinas for maintenance on Sunday and then drive back to Michigan on Monday. Then back to the office and my mild-mannered lawyer alter-ego until the next show. But, until then, it's freshly-mown grass and the smell of 100LL and JP-8!
Posted by Stephen Force (Steve Tupper) at 9:40 PM