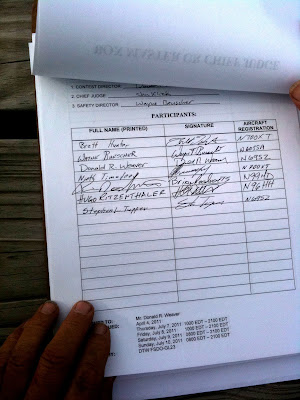 The good news is that I’ve signed onto my very first FAA waiver. That’s the signature page right there. The FAA waiver allows a number of things, including the obvious items like being able to fly upside down in active Class D airspace. And some not-so-obvious things, such as being able to fly with less than the full fuel reserves (essential when you’re flying aerobatics and need the aircraft as light as possible – As long as you can glide to the runway when you’re done, you’re good to go). 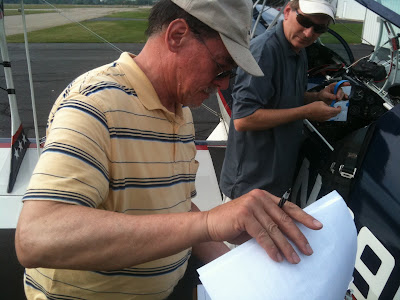 The other good news is that the contest inspector teched out the aircraft, parachutes and pilots, so Don, I, the parachutes, and the Pitts are all good to go. Don and I flew back to Ray Community Airport (57D) in the Archer and then Don and I flew the Pitts back to Jackson (KJXN) to get teched out and to fly some practice sorties in the box. It was kind of nice to just fly the Pitts straight and level. In fact, I actually tracked the course pretty consistently from the front seat. There’s no GPS (or much of anything else) up there, so Don would call out the occasional heading correction and I’d pick a cloud or a lake or some other landmark and fly the course visually. I think that many pilots get goofed up by the instrument rating and forget how consistently one can fly by just picking landmarks and flying to them. I know that I’m one of those pilots.

We also got some formation in with the Archer during the first few minutes after departing Ray. Pierre shot some pictures of the Pitts from the Archer and I’m looking forward to seeing those.

Having declared good news, there’s bad news, too. I SUCK!
I flew the whole IAC 2011 primary with Don out above the farm fields this past Sunday and I was really happy with my performance. Don seemed to be happy with it, too. So I went into this practice session excited and optimistic.

That all evaporated as soon as I was about 500 feet up and climbing. I have studied the airport grounds using Google Maps and I know where the box is. Heck, I spent the morning out there staking out Tyvek to mark it. But everything went into a cocked hat when I got up there to fly the sequence. Box? What box? Where’s the damned box?

I had an awful time identifying where the box was. In my defense, the box is to the west of, and parallel to, Runway 6/24. It doesn’t line up with anything else. No roads, no section markers, no nothing. And it’s nearly impossible to see anything (much less the box markers) out of the front seat of a Pitts S-2B. But I ought to be able to get the general gist.

So, thus lacking situational awareness and really preoccupied with how disoriented I was, I flew for crap. I over-rotated on the spin and got disoriented on the pull-out. The Cuban was pinched at the top, I was shallow on the downline, and I didn’t hold it long enough. The loop was pinched at the top. My slow roll sucked as badly as it usually does. The second run through didn’t show much improvement. I got the spin stopped at the right point (even if I was cocked over with too much right rudder), but I forgot the aerobatic turn and even got turned around by 90 degrees, confused Runway 14/32 for Runway 6/24, and started heading out of the box to the east over the airport (a maneuver guaranteed to get the tower nervous, if not angry).

I knew that I’d probably have an outing like this the first time I tried to fly the sequence in a box. I knew that a certain amount of Sunday was dumb luck. But I didn’t expect to suck this badly. I absolutely stank up the joint.

But that is, in large part, why I’m here on Thursday and why I’m going to go practice a few times on Friday before competing Saturday and Sunday. I’m at least smart enough to know that I need to work on this stuff. 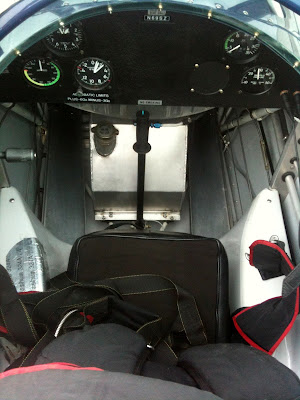 And then get a little more comfortable in my office there in the front seat. When you boil my time down, I have something like 1.5 hours flying the Pitts aerobatically. And that’s in bits and pieces from five flights

And I suppose that I could add a couple of other items of good news. My takeoffs and landings are getting a lot better. Nowhere near perfect, mind you. But Don hasn’t had to intervene in five of my last six landings and I think I’m getting the feel of the airplane. I still have a way to go in getting my footwork right. I need to get the pitch attitude on takeoff more consistent. I need to round out a little more gracefully on the landings. But I’m getting it. I’ll probably move to the back seat after a the competition is over and I get in a few more flights. That’ll make things easier in terms of visibility.

And my acro tolerance is really improving. I had no nausea in the course of flying the sequence twice and doing some other maneuvering. That’s a real improvement. It’s hard to fly when you’re worried getting lunch all over what few instruments you have up there in the front seat. I’ve know for years that I can fly a fair amount of acro once I build up tolerance. And flying lots of short hops like this is a good way to build it. I have a weaker stomach than most people who fly acro. But I keep at it. I think that I get a certain amount of respect from people b ecause of that. I’m the dog who keeps chasing cars. Because, one day, I might catch one.

So tomorrow is another day and another series of sorties in the box. I have a LOT to work on. But I’ll keep at it. The goal for the competition is to complete the sequence with no safeties and no FAA violations. I have tomorrow to get to the point where I can do that. And I’m going to take that opportunity.

Hi Steve
Its great reading your blog, I wish I could be there to watch. Relax and enjoy the flying.
Happy Landings
John Maxfield