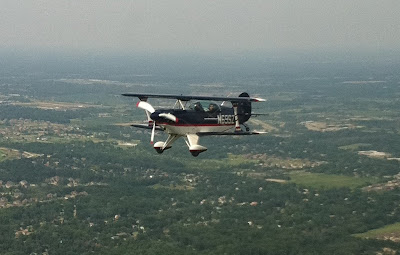 “Steve Tupper, the box is yours. Have a good flight.”

These words have now been uttered twice on a discreet frequency in the skies near Jackson, Michigan. Each time, they have caused the occupant of the front seat of a growling Pitts S-2B circling at 3,800 MSL to hunch down behind the windshield, swallow hard, and think thoughts to the effect of, “Your damned right it is! Watch this!”

I have now flown aerobatics in anger.

I have sucked, mind you. In fact, I have sucked mightily. But I have flown acro in (or near) a box with judges looking up and giving scores.

For those just joining the story in progress, I’m flying in the Primary (easiest) category at the IAC Michigan Aerobatic open at Jackson County Reynolds Field (KJXN). I’m flying a Pitts S-2B with Don Weaver in the trunk as safety pilot. Don is as talkative and helpful as ever through takeoff, climb, and orbit until I wave into the box. Then he falls silent and says and does nothing until I finish and wave back out (or make a genuine attempt to kill us or ask for his help).

Three competitors are flying primary here at Jackson. After two of the three times flying the Primary sequence, I’m in second place and only 15 points out of the lead. First place is within reach and I’m going to make a real run at it tomorrow.

I have scored very consistently the first two flights. Within a few hundredths of a percent the same. I have screwed up slightly different things each time. I felt a lot better about the second flight. And I have a pretty good idea of what I need to do on the third one.

The thing that is getting to me is the second maneuver. The spin. I haven’t gotten good entries into the spin on either of the two competition flights thus far. And that affects my setup for the remaining maneuvers. If I can nail the spin, that might be enough to pull this out.

In any case, it’s late. I need to hit the sack so I can fly my best tomorrow. More when I get back to the keyboard.
Posted by Stephen Force (Steve Tupper) at 12:08 AM

I envy you. Go out there and do good things tomorrow!