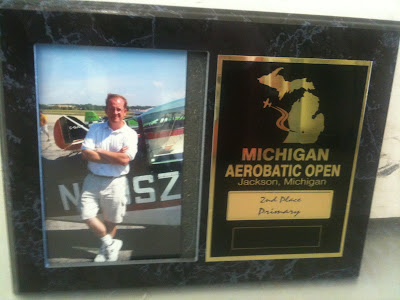 The IAC Michigan Aerobatic Open has wrapped up and I left the field this afternoon with the second place plaque for the Primary category.
I started today in second place, where I've been since the first flight. On the second flight, first and third places swapped places and the lead widened to about 15 points (not much). So first place was within striking distance.
I walked the ramp mumbling to myself and doing the acro dance for which aerobatic pilots are sometimes known. I set up the cockpit just the way I wanted it (kidney-relocating tight). Then I flew the last sortie and left everything I had in the box.
I scored about as well as I had in the prior flights (and so did the other competitors) and thus ended up second. But I had much better situational awareness and my peripheral comprehension was a load better. I didn't do anything that would impress Mike Goulian, but I broke out of a plateau and began to better understand what I was doing up there.
There's something about an epiphany that comes to you when you're inverted on a 45-degree downline, timing the roll and pullout. Actually understanding what you're seeing over the nose and reacting to it in a businesslike and competent manner. Not as precisely as I'd like to, mind you. But, hanging in the straps a couple of thousand feet above the judges, I realized that this is a doable thing. I could get good at this. It is within my ability. It's not impossible. It's a simple matter of hard work.
When a thing that previously existed only in a dreamstate as some abstract thing suddenly becomes sharply possible with only hard work between here and there, it's an exceedingly rare and special thing. I got that this weekend.
I made a deal with myself not long ago. By going to Jackson and ramming the throttle forward in anger, I made good on that deal. Three flights. 18 minutes each from startup to shutdown. I flew aerobatics in anger.
I'm not Greg Koontz or Brett Hunter. I never will be. But now, when I stand there along the show line, I feel as though I have more right to be there. Because I took the next step beyond mere fanboy. Because I reached over the fence and tasted some small part of what happens in the box. And I'll keep reaching in there for the electric stuff that happens there.
I made a deal with myself. This weekend, I made good on that deal. And it feels good.
Posted by Stephen Force (Steve Tupper) at 9:38 PM

Welcome to this side of the Acro (Camp) fence! You know, this could get expensive...
Happy Landings
John Maxfield

Well written and flown, Steve! Back seat and Sportsman next! DRW