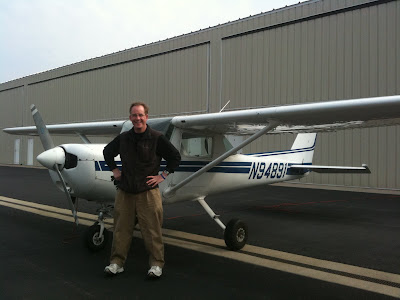 These are the show notes to an audio episode. You can listen to the show audio by clicking here: http://traffic.libsyn.com/airspeed/AirspeedMacGuyverSix.mp3. Better yet, subscribe to Airspeed through iTunes or your other favorite podcatcher. It’s all free!

Many of us are used to the aircraft that we regularly fly. We know how the engine sounds during all phases of flight. We know where all the gages are. We know what kind of control pressures to expect. We know how all of the avionics work. And there’s a lot to be said about being familiar with your aircraft. You’re safer and more competent that way.

But sometimes it’s a good idea to break out of the familiar and go stretch the envelope a little. And not necessarily by flying upside down or pulling Gs. Anyone who’s listened to Airspeed for very long knows that I have an ongoing love of a certain Cessna 152, tail number N94891. Almost 10 years ago, I flew 891 on my first solo from Runway 5L at Willow Run Airport (KYIP) in southeast Michigan. 891 lives at Solo Aviation at Ann Arbor Municipal Airport (KARB) now. Two years ago, I tracked her down and got up with an instructor to get checked out in her. I did it mostly for the nostalgia of it.

But I realized that it’s also good every once in awhile to go fly an airplane that’s different from what you usually fly. I mostly fly Cessna 172s and 182s, and that’s mostly Civil Air Patrol aircraft when I’m out flying proficiency missions. Not that the C-172 or C-182 are huge aircraft, but they’re pretty stable for what they are. I noticed at Oshkosh two years ago when I was flying the Remos that it struck me at touchy at the controls and very susceptible to turbulence. Really, the Remos is fine. It’s just smaller and more responsive and I wasn’t used to that.

So I’ve made it a point to go get checked out in 891 or a similar aircraft every year as a way of flying something different and making sure that my skills continue to embrace a broader range of aircraft sizes and handling qualities. And, while I was at it, I realized that I could also turn the flight into an additional exercise.

Do you remember the TV series MacGuyver that ran on ABC from 1985 to 1992? Secret agent Angus MacGuyver would escape from the bad guys and save western civilization using only a sock, a flashlight, some clarinet reeds, and Scotch tape. To “MacGyver” is even a verb in certain circles.

891 was an IFR-capable aircraft when I first flew her, but she’s VFR only at this point. But she has a VOR head and everything else that one would need to shoot a basic VOR approach. There’s only one nav radio and no flip-flop switch, so it would be tough, but not impossible, to identify an intersection by re-tuning the VOR to a cross-radial.

But let’s make it more difficult. What else might you have in your flight bag? What about that Sporty’s handheld radio that has a VOR tuner and a primitive OBS display? What about that hunting and fishing GPS that you carry as a backup? Wouldn’t those and other knick-knacks be the ingredients for a simulated partial-everything emergency VOR 6 into Ann Arbor? The “MacGuyver 6?”

I arrived early and preflighted 891. About halfway though, Theresa Whiting arrived. Theresa is a CFI at Solo Aviation and is the 2010 Great Lakes Region CFI of the Year. She woulf conduct the checkout. I did my usual flow-based preflight without the checklist and then stood at the nose of the airplane with the checklist to go catch anything that I might have missed. We briefed the flight and I got points for my CAP-style brief format and flow. Then we started up and taxied out.

I had my hunting/fishing GPS in the pocket of my thermal vest and was wearing my headset that has the view-limiting device on it for IFR practice. I had the approach plate for the VOR 6 at Ann Arbor handy on my kneeboard. Shortly after the run-up, we were cleared to take off.

We went south of the airport, being careful to avoid the Detroit Class B to the east. Visibility was between four and six miles with haze and there was no horizon to speak of. I did the steep turns more or less on instruments with the occasional glance out the left window to track by progress around the compass. I got the burble of my own wake turbulence on both steep turns. I climbed a little on the second one, but got it back on track by the time we got back around to the initial point. Kind of like Chi Chi Rodriguez’s gold swing. It might be ugly at points, but it’s nearly perfect for that half-inch interval when he actually made contact with the ball.

Then the stall and the engine-out. Both went beautifully. Proof that training pays off. I hadn’t flown for four months before that day and it certainly wasn’t mad kinesthetic skills that caused me to fly that well. It was ingrained training. Doing the same thing the same way every time for hundreds of hours over the course of years. I might be a pretty good pilot someday! So I stretched the parameters a little by getting the ATIS, tuning the VOR, and setting up the approach.

Then the hood came down. To set the table, I’m going to fly the VOR 6 approach, which involves tracking in to Runway 6 on the 215 radial of the Salem VOR (SVM). I’m using the single VOR head in the airplane to track my inbound course. I need to identify HARTZ, the final approach fix at some point. I could technically do that by re-tuning the VOR to check a cross-radial, but there’s no flip-flop switch and only knobs to turn to set the frequency. The other way is to use the distance from the Salem VOR with either DME or an IFR GPS.

To add complications to this approach scenario, I assumed that the VOR cross-radial wouldn’t work and instead loaded in Salem on my little hunting GPS and put that in my lap to use for DME.

Remember, we’re VFR and there’s no actual emergency. But I wanted to see how I’d deal with an unfamiliar setup in the cockpit.

The instrument scan came back to me pretty quickly. Even though I mostly fly G1000 equipment when I’m IFR, I’ve made it a habit of shooting approaches in round-gage aircraft pretty frequently to keep that scan internalized. I’d never been in a C-152 under the hood before. It’s a lot more squirrely than even a C-152. I had to back off on the controls and fly with my fingertips to keep from over-commanding the aircraft. The attitude indicator was disagreeing with the turn coordinator and the DG. I let the panel vote and concluded that the Attitude indicator was goofy. Theresa confirmed it.

It got worse and I started getting the leans.

It continues to amaze me that, even though I know that the attitude indicator is goofy, I keep looking at it and I want in the worst way to fly based on what it says. I try focusing on the turn coordinator instead, but to little avail. Theresa found an instrument cover and I blocked out the attitude indicator. By that time, we were about 10 miles from the airport and it was time to call the tower.

We decided to go to the circling minimum of 1,540 MSL. Theresa would tell me when I got within visibility minimums for that approach and I’d do the landing just like I had descended from the mist.

So there I am, partial panel in an aircraft that I’d never flown under the hood before with a failed attitude indicator, a single VOR, and a hunting GPS in my lap. And the winds aloft are from the left at a pretty good clip. I’m taking big cuts at the approach course, but not doing too badly.

Not having things where I expected to see them really added to the workload. I think I had to work twice as hard to get the same result. Using the turn coordinator and DG for bank. Using the little GPS in my lap for DME. Managing altitude and airspeed in an airplane for which, if I ever had preferred power settings, I’ve since forgotten them. We hit the final approach fix and started down.

A few minutes later, the tower cleared us to land and Theresa called the airport in sight. The wind was more or less directly across the runway and the tower offered me either landing direction. I chose 24 out of force of habit. I came out from under the hood and kept the airplane in close.

One more GUMPS check and it’s time to get down.

We did a total of three takeoffs and landings. My approaches were pretty good. My touchdowns were not beautiful, but competent. On the last one, Theresa tried to compliment me, but the airplane immediately left the pavement again for a moment before settling back down.

So I’m checked out in the airplane for another year or so and I can go back to Ann Arbor and fly 891 whenever I like. And it was a good experience in other ways. It’s not that I know how I’d react and perform if systems really started crapping out in IMC. There’s no way to simulate the sweat and the pucker factor. But it’s a good exercise to change things up every once in awhile, add to your workload, and see how you respond. Unfamiliar airplane, failed attitude indicator, single VOR, and nonstandard DME were pretty good for this time.

I still need to get up and try out the VOR function on my Sporty’s radio. I think that that’d be at least interesting if not actually helpful as a training exercise.

If you’re flying the same airplane the same way all the time, you’re missing out on an opportunity to test your skills and become a better pilot.

I hope you never have to shoot the MacGyver 6. But if you ever had to, wouldn’t it be great if you had done something like it before on a nice VFR day with a competent safety pilot watching out for you?