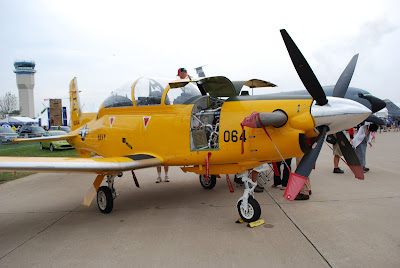 We arrived yesterday at Oshkosh and hooked up with the myTransponder crew at Lindbergh and 48th. Thunderstorms and rain kept the skies pretty low and gray most of the day and the shooting was iffy at best. But that’s the beauty of Oshkosh. There’s something to do no matter the conditions. So I went strolling in the static area.

It’s not as though there aren’t a load of really fast and pointy aircraft on the ramp. There’s even a 9th RW T-38A from Beale. But I remain a sucker for the T-6 Texan II.

The copy on ramp yesterday was a B-model in the unmistakable Navy yellow. The Navy uses it for for Primary and Intermediate Joint Naval Flight Officer (NFO) training. It’s also a B model, which I hadn’t yet had the chance to see up close. 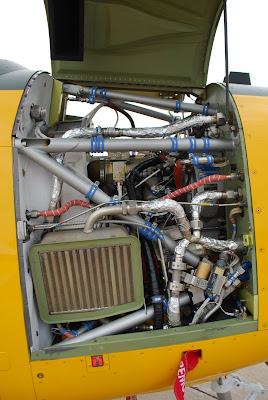 The airframe and powerplant are essentially the same as those in the T-6A. A Pratt & Whitney PT-6A-68 engine, downrated to 1,100 hp, provides all of the power you’ll need for maneuvering and the straightforward flying characteristics provide a platform that makes pilots out of pedestrians. The T-6A and B are both essentially Pilatus PC-9s with Martin-Baker ejection seats. 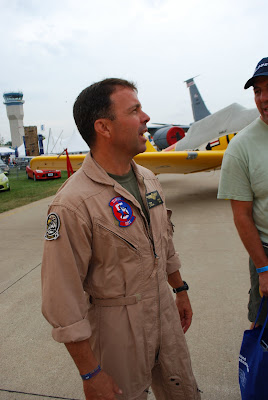 Lt Col Tom Priest is the Operations Officer at Training Wing Five at NAS Whiting Field in Florida. He brought the aircraft to OSH and was taking questions from the crowd. I asked him about the difference that make the B model what it is. A quick hop up onto the wing made it all pretty clear. Where the A model has an overwhelmingly round-gage cockpit, the B model is wall-to-wall glass.

Lt Col Priest says that the glass makes sense because most of the destination platforms for NFO trainees are either glass now or will be soon. The only downside of the automation of avionics and flight systems appears to affect NFO trainees who go on to helicopter platforms, where that automation is either not available in the airframe or of a kind that doesn’t really lend itself to automation in the first place. Just as we’re seeing in the GA fleet, glass is taking over cockpits. 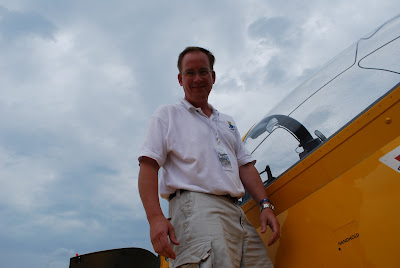 There’s nothing wrong with anything else on the ramp. But I just keep coming back to the T-6A/B. It’s a go-kart in the sky that makes military pilots. It’s a blast to fly in the lower parts of the MOA and it has better power and performance than the Air Force had with the T-37 Tweet or the Navy’s T-34C Mentor. I look back very fondly on the 1.4 hours I got to log with the 559th FTS at Randolph AFB. And I’d climb back into one of these airframes any time.

If you’re headed for NFO/UPT, I envy you. You have a spectacular airframe to look forward to. Especially if it’s yellow like this one!
Posted by Stephen Force (Steve Tupper) at 10:22 AM

It is a great platform. I am currently flying the T-6B with VT-3 at NAS Whiting Field and just finished up with the aerobatic phase of primary. I have not yet had a chance to fly 064 that you saw but I have flown newer ones with less than 15 hours on the airframes. Nothing like the new plane smell and a seat that still has some padding to it!