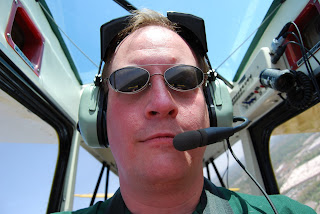 These are the show notes to an audio episode. You can listen online right here by clicking: http://media.libsyn.com/media/airspeed/AirspeedTaildragger1.mp3.

I actually needn’t have worried. Other than taxiing (which was an exercise in humility), the ‘three behaved beautifully.

But my tailwheel training has since become a lot of fun and I’ve spent a lot of time in a Citabria since then. 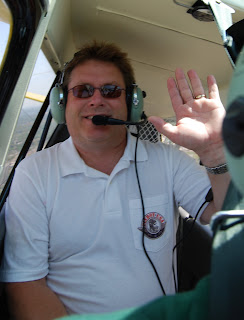 My instructor is Barry Sutton of Sutton aviation at Oakland County International Airport in Waterford, Michigan, although it’s “Pontiac” on the radio. The ICAO designator is PTK, for those following along in their A/FDs.

Barry’s a DE and an amazing instructor. John and Martha King have nothing on Barry for cockpit chatter. Barry is polished and smooth and seems to have a telepathic sense for what you need to know and immediately begins telling you before you have to ask. But Barry also has a talent for being quiet when he senses that you’re working things out, which is a rare thing indeed. I think Barry is the best instructor with whom I’ve ever flown. And I guess that’s saying something these days, as many people who’ve occupied the right seat in airplanes I’ve flown.

Anyway, I got ahold of Barry and scheduled a time to go get an intro to taildraggers and to go do some pattern work. 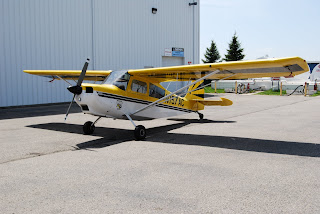 t seats two in tandem. I’m in front for these flights. It’s a little weird if you haven’t flown a lot in tandem airplanes. You don’t see the instructor directly, so his or her voice is just sort of there in your ears. Like a voice in your head that’s teaching you to fly. Note: If you still hear a voice in your head telling you how to fly when you’re solo, consider a precautionary landing and some rest.

Flying a taildragger is different in many ways. Probably the most important is that the center of gravity is behind the main gear. If you think about it, that’s an important thing because, if it wasn’t, the airplane would simply rest on its nose with the tailwheel in the air.

The most important consequence is that taking off and landing in a taildragger is a little like pushing rope. If there’s any off-center drag or friction, the center of gravity is going to want to come around from behind you and get in front of you. In a taildragger, that’s called a ground loop and it’s embarrassing at best and can bend you and/or the airplane at worst.

Think of it like this. The nest time you’re in a grocery store parking lot, go grab a shopping cart. Turn it around backwards and put your forearms on the sides of the cart, rest your elbows on the front corners, and grab the sides with your hands. Now run really fast. The cart isn’t very graceful and it gets worse the faster you go. That’s a pretty good proxy for what it’s like the first few times you fly a taildragger.

One other thing as we get started. Barry talks a little about an imaginary nosewheel. He is, of course, addressing the fear by tricycle-gear drivers like me that pushing the nose over will result in a prop strike. The fact of the matter is that there’s a fair amount of downforce on the tail of the airplane and you’d actually be hard-pressed to have a prop strike. Even if you got pretty well beyond level, the prop would tuck under a bit before actually striking the runway.

For all normal operations, you can simply imagine that there’s a nosewheel in front and you don’t even have to imagine very hard. After a certain amount of forward force, the airplane will resist you pretty well and the nose feels pretty stable.

Also, this is my first time flying an aircraft with a stick. You hold the stick in your right hand. Push and the houses get bigger, pull and they get smaller. Left and right are as you’d imagine. The throttle is a knob on the left wall and the carb heat is a smaller knob just below it and you operate those with your left hand. Trim is also on your left, but it’s only marginally helpful for gross adjustments. It’s almost impossible to trim the airplane for hands-off level flight.

The transition from yoke to stick took ten seconds. I’m not kidding. It seemed completely natural immediately. And I love, love, love flying with a stick instead of a yoke. I’d have to get a different kneeboard if I was going to fly the Citabria IFR (and, by the way, it’s IRF certified), but I’d consider doing that. As it is, I fly it without a kneeboard and take notes on my right knee with a fine felt-tip marker. Right on the knee. A prouder tattoo one cannot imagine. In fact, I’ve often considered writing an ATIS on my knee before going out just because I think it looks cool.

The first order of business was to familiarize me with the feel of the rudder at high speed before rotating. To that end, Barry and I did two high-speed taxis down Runway 27L. Barry had the stick and the throttle and got us moving just fast enough to get the tail off the ground. I’m sitting up front with my hands in my lap and feet on the rudders.

Not bad. We taxi back and do another one.

Barry and I talk about the first run and get ready for the second one.

Then it’s time to do the second high-speed taxi.

We taxi back to the approach end of 27L. this time, we’re going to take off. The wind is pretty heavy out of the south and I’m not ready to crosswind operations in this airplane yet. We’re going to ask for a right turn on takeoff and make right traffic around to Runway 17.

The other kind is a wheel landing. In a wheel landing, you land on the mains and then let the tail fly until it can’t fly anymore. It’s much the same as takeoff except that you’re slowing down. It’s also a lot harder because (a) as a tricycle-gear pilot, you’re overly scared of nosing over and having a prop strike and (b) you don’t have that steerable tailwheel on the ground and you’re instead depending on the rudder for directional control, even though rudder effectiveness is decreasing all the way until the tailwheel makes contact.

All of the landings today will be wheel landings. That’s because the DC-3 almost always does wheel landings. Unlike the Citabria, the ‘three is very stable in a wheel landing. In fact, although the ‘three can and does do three-point landings, it’s discouraged because the tail could begin oscillating up and down and, when a tail that big with that much momentum starts to oscillate, you can have control departures, prop strikes, and other nastiness.

But the Citabria is a good platform for understanding what goes into landings of either kind and we’re going to do some wheel landings today.

Here’s the takeoff from runway 27L and part of the pattern over to Runway 17. You can tell that I’m really enjoying the way this airplane flies.

And here’s the approach and the first landing. There’s a lot of convection and other turbulence, so you’ll head Barry coaching me on the throttle until I get the approaches dialed in.

Not awful, but I can tell that Barry’s doing a lot of the flying on the landing. We taxi back to the approach end of Runway 17 and I get my second takeoff. I feel pretty good about the takeoff and do most of it myself.

We get through the thermals and it’s time to touch down again. I don’t keep the stick forward to keep the tailwheel off and Barry helps me out with that. I’m exhibiting ever reaction that you’d expect from a tricycle-gear pilot flying a taildragger for the first time.

We head around the patch again and I put in my worst landing of the day. I keep wanting to pull back when I need to be disciplined enough to keep it forward to keep it on the mains and keep the tail off the ground. This time, we have to play with the power and oscillate a few times before getting the aircraft down and stopped.

I should mention that Pontiac is a pretty big airport with parallel main runways in addition to the crossing runway that we’re on. It’s a rare time when we have the airspace pretty much to ourselves. Barry’s friendly with the guy in the tower and I take the opportunity at the end to try to cloak my landing in a PIREP.

We got something like seven takeoffs and landings that day. Here’s the last one. It was a little better than most, but I still didn’t push adequately and we had to play with the power in order to get the right attitude for touchdown.

Needless to say, about a month later I had a tailwheel endorsement from Dan Gryder in the DC-3. The ‘three was much easier to fly than the Citabria in many ways. Lots more on the checklist and much more technical to get her over the fence but, once over the fence, docile as could be.

My understanding with Barry is that I’m going to fly the Citabria with him until he tells me that he’d sign me off for a tailwheel endorsement in that aircraft. Then I’ll really feel that I’m a tailwheel driver. Most of the flights since then have been aerobatic for the first hour and then pattern work after that. As I record this in mid-January, I haven’t been up in the Citabria since November, but I’ll be back in the saddle as soon as I can get there.

I think the Citabria is my favorite training aircraft thus far. It’s yellow, it’s new, it’s clean, it has great visibility (including a transparent roof), you sit on the centerline, you have your feet up on the rudders, you have a four-point harness, and it’s a genuine stick-and-rudder pilotmaker. Captain Chris of Plane madness did an informal poll on Twitter a few months ago, asking, if money was no object, what two aircraft would you own. I responded with the F-86 Sabre and either a Citabria or the Citabria’s big brother, the Super Decathlon. It’s that much fun.

Stay tuned because there’s lots more tailwheel and aerobatic audio stored up from the last year. And I’ve shot a lot of cockpit video of the aerobatic stuff, so I’m planning to release some more video episodes, too.