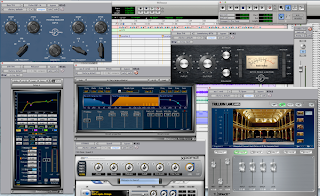 I love it when I see that I have an e-mail from audio wizard Scott Cannizzaro. It usually means that he’s made progress on a mix of the audio for the show or for the soundtrack of A Pilot’s Story. I got just such an e-mail this morning.

Scott is re-mixing Theme From Milliways (Go for TMI) for use in the upcoming film, A Pilot’s Story from Wilco Films. Airspeed listeners will remember the music from the Airspeed episode First Solo from October of 2006. It was my first big sprawling narrative and I recorded the tune especially for the episode.

It had its genesis when I was in law school. I played a lot of guitar during breaks in studying and I had (still have) a Martin Backpacker that I used a lot. The Backbacker has no truss rod and the intonation higher up the fretboard is awful. So I tuned it DADGAD and played it mostly open. It sounded really good for playing Stan Rogers songs.

The piece evolved and is named for my law mentor Sam Simpson’s place up north, which is itself names for the restaurant at the end of the universe of Douglas Adams fame.

The “Go for TMI” part came when I decided that the piece (played up-tempo) would be the piece of my space-folk album that would cover the big burn from low Earth orbit to head for Mars. (TMI = “Trans-Mars Injection,” just like TLI or Trans-Lunar Injection was the big burn that Apollo missions used when leaving local Earth space for the Moon.)

Anyway, Scott has done a wonderful job so far and he’s still tweaking it. He has added some high and low string voices to the 12-string guitar, mandolin, and (really horrible) violin tracks that I initially recorded. He has also stretched out the last pause to allow the dramatic “Steve, Cessna 152, July 14, 2001” at the end. Close listeners to the episode could probably tell that I had to stretch it by brute force in post because I didn’t leave enough time.

Anyway, Will has been having his interview subjects for the film each say their first names, the aircraft, and the date of their first solos and he’s considering doing a part of the film on the first-solo experience. I've seen an early cut and it looks great. (USAF Thunderbird No. 5, Maj Samantha Weeks did hers in the Cessna T-37 Tweet!) If he does it, I think this is the music he’s going to use. And, if I manage to get into the film, that's the part I most want to be in.

More recording soon, I hope. Jim Kreucher and I will likely go back into the studio for a couple of days for an album project and I have to get my second MacDowell piece written and the basic instrumental tracks recorded soon, too.