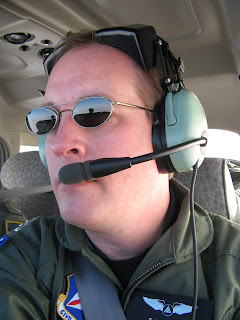 This is a regular blog post. Please check the other entries if you’re looking for show notes or links to show audio.

I heeded the call to devote today to service by getting up and doing some currency flying with the Civil Air Patrol. Cross-country Ann Arbor (KARB) to Battle Creek (KBTL). 2.1 hours with ILS 23 at KBTL and VOR 24 KARB. 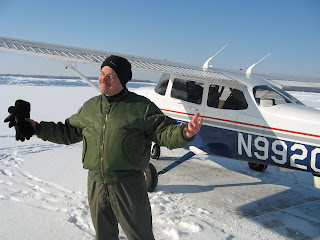 In the other seat was 1Lt Norm Malek. I flew with Norm late last year and had a good time and Norm had the excellent idea of taking this morning to get up again and knock some of the rust off. We launched into 2,000-ft ceilings with five miles and haze, but it cleared up shortly outside of Ann Arbor’s Class D and we headed up to 4,500. We got over the scattered to broken layer by 1,000 feet and it was CAVU by the time we got to Battle Creek.

I shot the ILS in to 23 and did a fair job of it. The runway had about an inch of packed snow on it, but it’s 10,000 feet long and I just let the aircraft roll out as long as it wanted to. The tower asked me about braking action and I confessed that I hadn’t touched the brakes. I'm willing to fly Citabrias upside down, but wasn't about to touch the brakes on that runway until I was down to taxi speed.

It was slow in the tower and we made some chit-chat. I got a few shots of the Blue Angels going by the tower at the Battle Creek airshow in 2007 and sent a 20 x 30 blow-up of one of them to the tower crew. It turned out that the guy on duty had it in his office. Never, ever miss a chance to suck up to ATC. 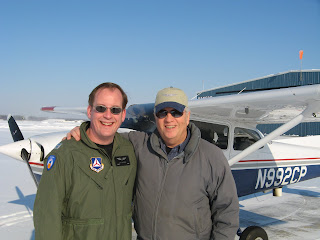 My uncle, Dennis Reed, lives near Battle Creek. He flew air cav in Viet Nam and then flew the executive jets for Kellogg’s for decades. He’s retired now and I called him up last week to see if he might be interested in meeting up with us. We hooked up at Century Aviation, got a cup of coffee, and let him inspect the aircraft. When he was an instructor in the 1960s, he could fly the pattern in a Cherokee without touching the yoke. Throttle, trim, and rudder only. He’s thinking about going in on an experimental or light sport with a friend and I could see the gleam in his eye when he talked about it.

Uncle Denny is the only other aviator in the family. Our particular branches of the family don’t get together too much (not that we don’t like each other- it’s just a logistical nightmare), so most of my aviation has taken place in a vacuum as far as the family has been concerned. So it was really, really, nice to fly in and see Uncle Denny in an aviation context. He just pops a little more when he’s standing on the ramp. I think the sun hits him a little differently there as opposed to anywhere else. Let’s make no mistakes. I flew in, but I was standing on his ramp.

In fact, I stand on his ramp in a lot of places, and not just at Battle Creek and not just when he’s around. We all owe him and men like him our gratitude and respect. Showing up in a zoom bag as a pilot after flying across the state and greasing the landing brought a couple of things full circle today. Really cool. 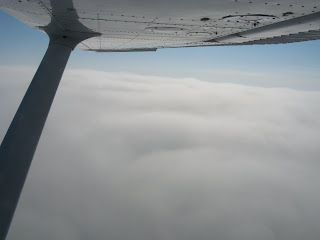 The trip back was fine until just after Jackson (KJXN). We flew at 5,500 feet, about 1,000 feet over a scattered, then broken layer. The haze made the horizon hard to make out at times, although the ground was readily visible up until about 18 miles west of Ann Arbor. So we got a pop-up IFR clearance and shot the VOR 24 in to Ann Arbor. 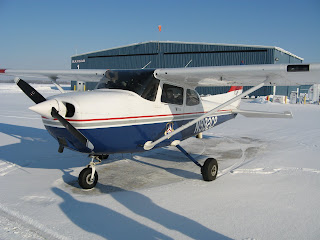 I’ve said it before, but I’ll say it again. If you’re a pilot and you’re not in the Civil Air Patrol, what the heck are you thinking? Cherry, well-maintained aircraft. Great people with whom to fly. And you get to serve your community and country while you’re at it.

Happy birthday, Dr. King. This CAP pilot is current and proficient. I stand ready to help CAP perform it missions for America.

You should have stayed the night.