Cross-Country to Saginaw and Commercial Training 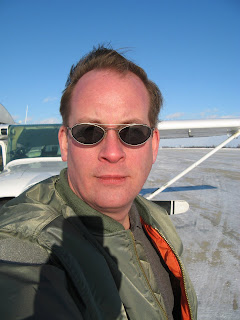 This is a regular blog post. Looking for show notes or links to show audio? Check out the other entries.

Finally got up yesterday after two cancellations. Not bad for Michigan in January, really.

I have three regular flying sources these days. CAP (currency and mission readiness in C-172s and, soon, the mighty C-182T with G1000), Sutton Aviation (tailwheel and aerobatics in American Champion aircraft), and Flight 101.

Flight 101 is an FBO/school with lots of C-172s, a couple of DA-40s, and a C-172RG. It’s my “rent a C-172 and go fly” place since Tradewinds closed its pilot center. I decided recently to start looking at the commercial certificate. I can do a lot of that with CAP, but having access to an RG and qualified instructors form another source allows me to train more often if I decide to do that. And it’s nice because the RG isn’t in very high demand. (After all it’s primarily for advanced training.) 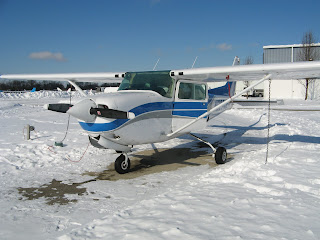 So, after being weathered out a couple of times earlier this month, I went up to refresh myself on the RG and knock off the rust. Most of my complex time is multi-engine and my only single-engine complex time is in this aircraft (about 1.4 before yesterday).

We went VFR to Saginaw (KMBS) to build some cross-country time. It was something like 5F on the ground and accordingly colder at altitude. The heater was non-functional. That’s not normally a big deal, but I’m a polar bear and usually wear only a light jacket in the cockpit because the instructor usually likes to keep it warmer than I like. I keep cold weather gear in the back in case of a forced landing away from civilization (I’d be teased roundly if my CAP brethren found me frozen to death after landing the plane uneventfully).

It was probably the coldest I’ve ever been in an airplane. Not unbearable, but pretty numb toes and we definitely went full-stop at KMBS in order to let me but on my MA-1 flight jacket. Much better!

I got 1.2 hood time on the way back, much of it in slow flight at around 75 KIAS with the gear down on a VOR radial fron FNT. We shot the LOC B/C 27L back into KPTK with a sidestep to 27R.

Both landings were actually pretty good (as, for some reason, is my custom on the first flight back after not flying since October or November). I like to be very tender on retractables. I know that the RG is built to withstand abuse from students learning to fly their first retractable, but the gear still looks a little skinny to me. So I carry a little extra power into the flare and touch it down like mom is in the back seat. A little crosswind on 32 on the way in to KMBS, but it was right down the runway at 9 on the way back in to KPTK. 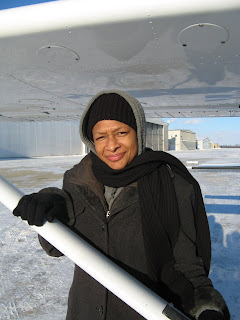 I’m flying with someone new, namely Niketta Wyrick, a CFII at Flight 101 at KPTK who started at age 14 and is a pretty talented GA driver. This is her at KMBS outside the FBO. I got a good and fair workout on the flight, appropriate to returning to the airport with some acknowledged rust on my skills.

We chandelled up through a sucker hole on the way there to get above the scattered layer at about 4,000 and went most of the way at 7,500. I probably would have run scud (albeit well above the minimum safe altitudes and at least 500 feet below the clouds) if it had been just me because my last instrument approaches were in October and I would not have wanted to be stuck on top and have to come back through single-pilot IFR with that much rust on my scan. But I felt comfortable with Niketta there to assist.

Depending on a couple of other flight opportunities, I’ll probably get up with Niketta to do some work on the commercial maneuvers soon.

In the meantime, I’m planning to go to some CAP currency flying on Monday out of Ann Arbor (KARB). Pretty excited about that. I haven’t flown out of KARB since 2001 and it ought to be fun. Thinking KARB-KBTL-KAZO-KARB at least. Maybe with a stop at KJXN on the way back.
Posted by Stephen Force (Steve Tupper) at 10:08 AM

added to my rss reader