0.3 Dual Received in the EAA Ford Tri-Motor - The Logbook Page Gets Even Cooler! 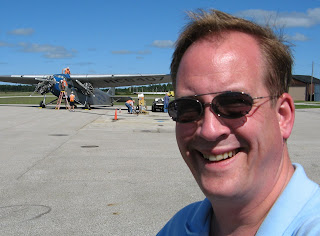 This is a regular blog post. Show notes and links to audio appear in the other posts.

I finally rendezvoused with the EAA Ford Tri-Motor in Midland yesterday. It was scheduled to appear at Detroit City Airport du ring Red Bull weekend earlier this year, but the city refused to make even minimal accommodations for the appearance and EAA had to cancel.

But the Tri-Motor is in Midland (Jack Barstow Airport) and I played hooky yesterday to drive up and get a flight. Like last time, I had paid for the right seat ($100 as opposed to $40 or $50 to ride in the back) in order to record audio through the intercom. Same this time.

I recorded cockpit audio and also shot lots of pictures of the experience. I’ll be putting together an episode about the experience shortly. Most of the cockpit audio consisted of each chit-chat with pilot Cody Welch, but there’s a little about the aircraft and flying as well. Cody’s a very approachable guy and he’s extraordinarily easy to talk to. I think the flight was as enjoyable because of Cody as it was for the aircraft itself. 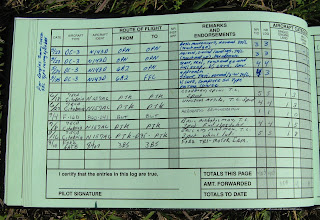 I asked around when I arrived to see if there was anything about the flight that might be loggable. I had e-mailed the EAA and asked before, but received no answer. Fair enough. They’re busy. But the lady running the manifest table said that it was common practice for Cody to sign your logbook. Too cool!

In fact, I got to fly a little bit of the cruise phase from about two minutes after reaching cruise altitude (about 1,000 AGL) to just before the turn to downwind. And Cody let me to the radio calls for base and final, so I have audio of myself saying “Midland traffic, the Ford Tri-Motor is turning left base for runway six, Midland.” Even more so than for the DC-3 pattern calls, it another Tri-Motor shows up in the pattern, I’ll revert to the tail number. Until then, I’m “the Tri-Motor.”

Cody signed my logbook with 0.3 dual received in the aircraft. That rounds out a logbook page that I don’t think I’ll ever better. DC-3, F-16D, and Tri-Motor with Citabria sprinkled in. That’s a really good logbook page and I’m really proud of it. 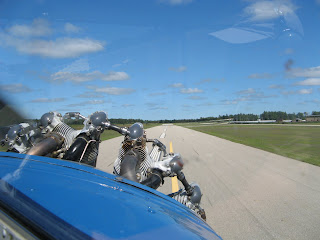 One shot from among those that I’ll post with the episode. This is the view out the front from the right seat of the Tri-Motor on takeoff on Runway 6. It’s pretty amazing how quickly the airplane gets up. The tail comes up within about 200 feet and it’s airborne in about 500. Not bad for an aircraft that turns 78 this week.

Stay tuned for the audio episode! I’ll try to produce and post it soon.

Posted by Stephen Force (Steve Tupper) at 7:50 AM

The 0.3 is awesome! Congratulations!