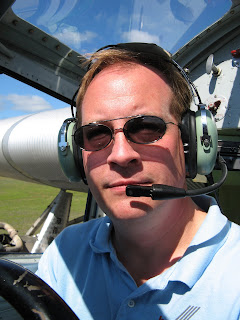 These are the show notes to an audio episode. You can listen online right here by clicking: http://media.libsyn.com/media/airspeed/AirspeedTrimotor.mp3.

I was all excited about Red Bull weekend here in southeast Michigan for a number of reasons, not the least of which was – well – Red Bull. But the EAA’s Ford TriMotor was also going to be at Detroit City Airport (KDET). I asked around and found that the only way to record intercom audio was to be in the right seat. That’s fine with me, because the right seat is only $100, as opposed to the EAA member rate of $40 for a ride in the back.

And being in the right seat might mean an opportunity to touch the controls. And log it!

Can you tell that I was bummed? Anyway, the EAA refunded my $100 and I didn’t think about if for a few months.

Then I heard on the radio and read on the EAA website that the TriMotor was going to be at Jack Barstow Airport in Midland, about a 90-mile drive from my house. The wheels started turning and I ended up standing on the ramp at Midland with a right-seat ticket in my hand on a gorgeous August afternoon. 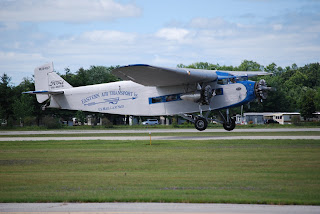 The Ford TriMotor (or “Tin Goose” if you like) debuted in 1926 and 199 were produced between then and 1933. It’s a boxy-looking high-wing taildragger that’s about 50 feet long, 77 feet wingtip to wingtip, carries up to eight passengers, weights about 7,800 pounds empty, and has a max gross of around 13,500. 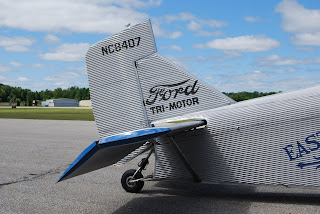 The EAA’s TriMotor, NC8407, a model 4-AT-E, rolled off the line in 1929 – the 146th TriMotor. It spent its early live in Cuba and the Dominican Republic. It returned to the US in 1949, where it barnstormed for awhile before being converted to service as a crop duster in 1950. It has three Pratt and Whitney engines that replaced the original Wright Cyclones during the refit. It later gave service as a water bomber and smoke jumper in Idaho. After again flying enthusiasts from 1964 to 1973, the aircraft was severely damaged by high winds at the EAA fly-in. The EAA purchased the wreckage and, after a 12-year restoration, returned it to service flying enthusiasts like me on flights much like the one that’s featured in today’s episode.

The EAA volunteers were hot-loading it with passengers when I arrived a couple of flights early. I stood on the ramp and watched the aircraft taxi in and out and take off and land while taking pictures for the blog.

After a briefing about the history of the aircraft in the briefing area, we trooped out the plane. I was first in and immediately headed for the cockpit to hook up the audio recorder. 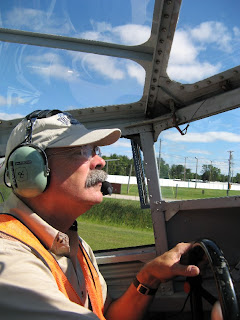 The pilot is Cody Welch. Cody runs Cody F. Welch & Associates and has spent 37 years providing aircraft sales and acquisition services to the general aviation and corporate owners market in Michigan. He lives at the Linden Price Airport and is co-developing Horizon Lakes Airpark as a live-with-your-airplane community. He’s also founder and president of Wings of Mercy East Michigan. He has lots of time in the TriMotor, as you’ll hear in the cockpit audio.

Shortly after I was situated and they settled in in back, we taxied out and prepared for takeoff. The TriMotor gets the ail off the ground within about 200 feet and it’s airborne in about 500 feet. We have a brief discussion about where he does or doesn’t want my feet, and then we’re on our way. It’s really noisy in the cockpit, so there isn’t a lot of discussion during the actual takeoff.

I note that the TriMotor has three throttles right next to each other. All of the props are fixed-pitch, so operation is pretty standard. Cody sets the altimeter to zero on the ground and we shoot for a cruise altitude of 1,000 feet above that.

Now the ride would be cool enough if all I got to do was sit there in the right seat. I had heard that the pilot sometimes gave the right-seater the controls on downwind and I was actually looking for any opportunity to touch the control wheel or otherwise do something loggable. I got my wish and then some at Cody gave me a couple of words of advice and then handed me the controls. How cool is that?

It was a gorgeous day. Blue skies with just a few scattered clouds well above 10,000 feet. There was a little convection, but not an unmanageable amount.

Cody went around on the first landing that I saw when I arrived at the field. It turns out that I witnessed a fairly rare event.

We headed north for awhile and then bent back toward the airport. Cody has me set it up for a downwind.

Cody takes the plane just before we make the downwind turn. I ask if I can make the calls the rest of the way in so I have some audio to use on the show. He seems to get a kick out of it and there’s more conversation on the way in. I’ll just let the rest of the flight audio run for downwind, base, final, and the rollout.

No go-around this time. We taxi to the gas pumps and Cody goes to fuel the aircraft. I take a few pictures and then head to the car, ready for a series of conference calls on the mobile phone. But an afternoon’s hooky well-executed by any measure. 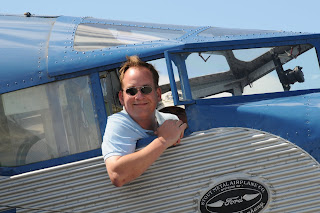 I’m very grateful to the EAA, both nationally and Chapter 1093, and to Cody Welch for making the TriMotor available where I could get to it and for making this a really nice flight.

This is a probably the last great quest of this summer. And nearly the end of what has turned out to be a really singular logbook page. As you probably already know, it happened that the four flights in the DC-3 for the type rating made up the first four entries on the page. Then, very unexpectedly, I got the F-16 ride with the Thunderbirds. Finally, I wrap it up with 0.3 hours dual received in the Ford TriMotor. And the rest of the page is sprinkled with Citabria N157AC for additional tailwheel instruction and a lot of aerobatics.

I considered talking about how the page covers a long period of history or covers a really diverse mix of aircraft, but I guess it really comes down to this. The private certificate and the instrument rating have been long-term projects that essentially concentrate on one kind of thing each. And that’s okay. Each require a lot of focus and they’re really worthy in and of themselves.

But this has been the summer of branching out. Of learning some new skills in different kinds of aircraft and under different circumstances. So far in 2008, I’ve had an instrument proficiency check, gotten a multi-engine rating, added complex, high-performance, and tailwheel endorsements, gotten a SIC type rating in a vintage airliner, flown in a fighter jet, and flown my first aerobatics at the controls. If there’s a story in the logbook or otherwise for this summer, it’s branching out and getting idea of the breadth of experience that GA has to offer. And that’s a really cool phase in any pilot’s development.

Plans for the future? Lots more aerobatics in the Citabria. A possible glider episode to be recorded in Ionia. Airplane single-engine sea in a PA-12 up in Traverse City in the spring. Probably recurrent training in Georgia in the Herpa DC-3. And I’ve been invited to attend the C-47 ground school with the Yankee Air Museum in March or April.

Am I going to top the F-16 ride? Probably not. Unless Burt Rutan or Sir Richard Branson call. (Hear me, gentlemen? 248-470-7944!) But there’s more than enough to learn and experience in GA. And I’ll continue doing the best I can to bring it to you.

Stay tuned for the big Thunderbirds summary episode and some of the audio from my aerobatics training. And I’ve been shooting video in the Citabria, so don’t be surprised to see a video episode or two.