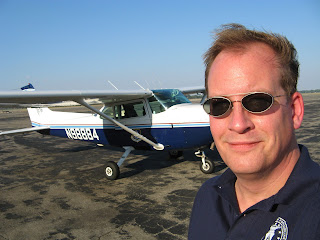 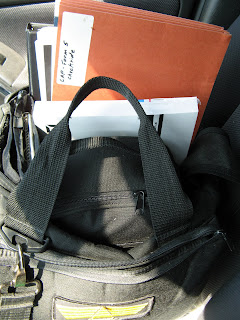 There’s a lot of prep that goes into this ride. It requires familiarity with CAPR 60-1, which is the CAP bible of flight operations. You have to take and pass an online exam on 60-1 and also prepare an aircraft questionnaire for the aircraft to be flown, in addition to all of the usual stuff that you might expect to have to pass for an FAA checkride. Here’s my flight bag on the way to Willow Run Airport (KYIP). Stuffed to overflowing with the paperwork, a POH for the aircraft, a FAR/AIM, my kneeboard, my headset, and, of course, the MP# recorder. I captured audio of the whole thing for use on a future episode.

I really enjoyed heading back to Willow Run. I trained a lot there, including launching my first solo from Runway 5L. It’s nice to be familiar with a place when you’re flying to standards and don’t otherwise know what to expect.

We launched northbound to stay away from the TFR for the University of Michigan game. Once at 5,5000 and in cruise configuration, Tim had me lower the hood and fly attitude at 55 KIAS while maintaining altitude and making turns to headings. A little difficulty with altitude and airspeed coordination, but I had never flown that aircraft before and I’m not sure that I’ve ever flown a 172P before (most of my 172 time is in 172Rs).

Some more maneuvering and then Tim failed my engine. I ran the memory items and started heading for a field. I had discussed my unfamiliarity with the Apollo GX55 GPS (I’m most familiar with the Bendix/King KLN94 and learning the Garmin 430) in the aircraft and had decided to fly the procedures as though I had no GPS. Tim gave me a quick lesson on how to work the NRST function and we glided over to Oakland Southwest (New Hudson) (Y47). Still plenty of altitude and I picked up a pretty worthwhile technique from Tim on setting up for a deadstick landing. Tim likes to fly a figure eight perpendicular to the runway with the center of the figure-eight just short of the numbers. That way, you’re never that far from the runway itself and you simply make the decision about whether to land as you come around each time. Some hard slipping, and we put her down on Runway 25.

A short field takeoff from New Hudson and then the usual battery of landings back at Willow Run. 1.4 hours and four takeoffs and landings. 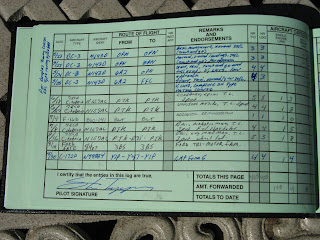 The logbook page continues to grow. I’m happy about this entry because it gets a C-172 on the page (without which the page wouldn’t have any element of what I usually fly) and because it’s another demonstration of competence, particularly competence as measured by the standards of CAP, for which I have great respect. I get a certain respect at squadron meetings for being the asst. wing legal officer and for having flown the DC-3 and gotten the Thunderbirds ride, but it was very nice to have this opportunity to demonstrate that I’m more than just a stuffed shirt and can fly to standards.

At least the VFR standards. It was enough to fly an unfamiliar airplane for the first time and enough to fly a C-172 for the first time since February (not counting the time in the 172RG at Flight 101), so I’m only checked out for VFR. But that qualifies me to fly mission transport, so I’m actually somewhat useful. And I can go get Norm or someone else who’s also Form 5 current and go shoot approaches or fly cross-country for currency in CAP aircraft.

Next up will likely be the mighty G1000 C-182, which I’ll probably do both VFR and IFR. Ultimately, I’d like to be qualified VFR and IFR in both the 172 and 182 as the medium-term goal. Then maybe train for mission pilot. 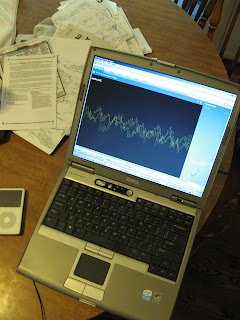 In other news, I got an e-mail from ace New York City sound guy Scott Cannizzaro with a link to the initial mix of the Thunderbird Groove (the music bed for the Thunderbirds ride summary episode). I seem to remember in the liner notes to John Mayer’s Continuum album that John thanked an engineer, saying something to the effect of “and thanks to Bob, who knows how we really sound.” Scott is very much that guy for me. From a rather skinny basic collection of tracks, he has augmented them beautifully with keyboards, lead guitar, and other very cool stuff. He’s not done yet, but what I’m hearing so far is really great. I’m going to have to work really hard on the script for the episode if it’s going to be worthy of the music.

Working title for the episode: Sometimes Alternates Fly. It’s still gestating, but parts will probably become fixed in a tangible medium before the holiday weekend is out. Really excited about how it’s coming together.

I dunno, I wouldn't be too ashamed of that logbook page :).