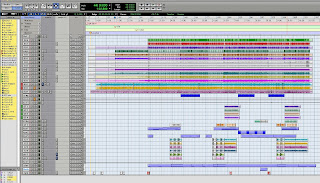 This is a regular blog post. Please check out the other entries if you’re looking for show notes or show audio.

Scott Cannizzaro tweeted a little while ago to show me how the mixing session for Thunderbird Groove is going. I am so jealous of his setup (not to mention his mad skills)! Somehow, my Audacity sessions just don’t look as cool after seeing this.

I need to get a Mac or something similar onto which I can hang more audio and video editing functionality. And really play with the stuff to figure out what else I can do. This just looks so fun. Will I ever have the kind oar that Scott has? I doubt it. And that’s probably 80% of what goes into coming up with a really great mix.

I FedExed the remaining tracks to Scott for arrival today (the studio at which I did the principal recording mixed the electric guitar and bass in the same .wav file, making it less than useful for mixing). Not sure that they’ll actually be necessary because the mix that Scott sent over the weekend is pretty cool. Although I might be saying that because I’ve been listening to little else since then.

Having the music available has really gotten the juices flowing on the writing end. I’m busy as hell at work and home and it’s really hard to stay focused when I have nearly all of the makings of the best Airspeed episode ever just sitting there ready to be sewn together.

Thanks again to Scott!

Stay tuned! I’ll probably release the first video episode f the podcast shortly. It’ll be the in-cockpit video from the Thunderbirds ride along with music and footage end editing stylings of Will Hawkins of Wilco Films.