1.4 Aerobatics and Tailwheel and Taxiing the Kids 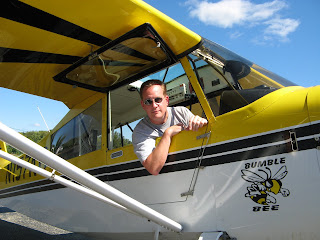 These are the show notes to an audio episode. You can listen online right here by clicking: http://media.libsyn.com/media/airspeed/AirspeedCitabria1.mp3.

Got up in the Citabria yesterday for a training flight. 1.4 hours of mostly aerobatics and landings. The plan was to go out, review the maneuvers that I’ve been working on up until now, and then do some spins, sort of as a killproofing exercise.

The aerobatics worked out well. Wingovers, loops, rolls, and hammerheads. Last time, I was at the point where the loop was mine. I flew them more or less without coaching (at least after a little review and coaching on the first one or two). This time, I added the hammerhead to that category. I’m getting good vertical uplines and downlines and handling them with good energy management (e.g. I get a good amount of time in some of the more dramatic accelerative phases while still recovering in plenty of time to keep the airspeed well within the design tolerances of the aircraft). I’m really pretty proud of that.

Same with the rolls. A roll in the Citabria involves picking up energy with a dive to about 120 MPH IAS, leveling out briefly, and then burying the ailerons left. You roll 360 degrees, pulling power smoothly throughout, and then you end up wings-level on a 45-degree downline (which you maintain for awhile), and then you recover. You lose a lot of altitude (500 feet or so) pretty quickly, which was news to me when we started, but it’s actually a very elegant move. You get and then give energy in an elegant, disciplined, precise, and measured way.

Inversion tends to bother me, even when I’m on the controls, and, by the time we got to the spin part, I was pretty green.

Barry gave me a pretty good lecture and demonstration of what secondary stalls can look like in likely scenarios. Still technically under control, but oscillating toward departure from controlled flight. We did one sustained falling-leaf stall, broke it, and pulled way-nose-high into a secondary stall, which, in turn, broke more savagely and dropped a wing hard. I’m sure that the third iteration would have been even more violent and that was the point of the exercise.

Just when we were ready in the training sequence for the actual spins, my tummy informed me that it had had enough. Discretion is the better part of valor, even though I had a Sic-Sack in my pocket and ready to go. I’ll get the spins in later this fall.

We headed back to the airport and got in four or five three-point landings. I was really pleased with the landings this time. I think I’m finally getting over one of the bad habits that plagues tricycle-gear pilots transitioning to tailwheel. I’ve been relaxing the back pressure on the stick after touchdown in much the way a tricycle-gear pilot would do to lower the nosewheel. In a tailwheel, you want to get the tailwheel down and keep it down. It both keeps the tail from oscillating and gets the steerable tailwheel down on the ground where it’s effective. Although I ballooned the last flare pretty badly, the landing worked out well and all of the landings had much more of a feel of positive control than I had experienced before. Very nice! I think I’m getting it. I realize that wheel landings will be another matter entirely, but I’ll revel in such success as I’ve had so far. 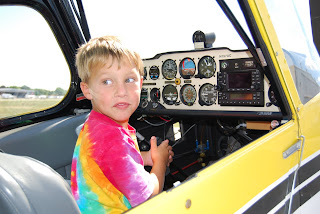 I took Cole and Ella out to see the Citabria earlier in the day. I don’t think I’ve ever had then in a taildragger before and they really seemed to like the tandem seating. Cole is really beginning to understand how the flight controls work. I can tell because, when he moves the controls, he looks right at the relevant control surface without casting about. You can see in this picture that he’s pulling and looking back at the elevator. 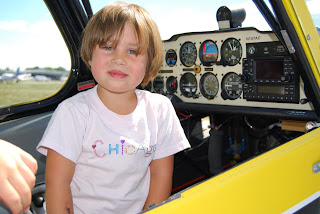 Ella, starting out in the back seat, expressed a little consternation about the stick moving around, apparently unbidden, as Cole worked the controls in front. She happily rotated up front and really seemed to enjoy seeing the different cockpit configuration. 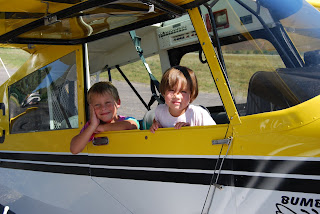 And here’s the coolest part of the day. The Citabria is owned by one of the instructors at Sutton Aviation and he leases it back to the school. He happened to be walking out on the ramp with a student and noticed me taking pictures of the kids in the Citabria. He knows that I’ve been training with Barry and I had ducked in when I arrived to make sure that it was okay to show the kids the aircraft. He also knows that I have a tailwheel endorsement from the DC-3 training, but that I’m conservative enough to come back for more training from Barry in the Citabria in order to really learn the ins and outs of conventional-gear aircraft.

My wife is wonderful and has been very tolerant of my flight training. Especially considering at least one event involving an instructor during my primary training. Even when I started taking aerobatic training, she didn’t object and she listened objectively when I explained the additional margin of safety that upset recovery and related training adds to regular GA flying. Heck, I had had thought long and hard myself about it before talking about it with her.

She’s not nuts about the idea of me flying the kids just yet. She approved getting up for a helicopter flight at Oshkosh and also said that it’d be okay to take Cole along if a spot had opened up in the back of the Herpa DC-3 (although she asked a lot of questions about Dan Gryder, all of which were easy to answer). But she’s still getting comfortable with the idea of me flying Cole or Ella.

In the meantime, I honor her feelings. I take the kids to the airport regularly and we ramp-fly whatever’s on the line, but they’ve never been in a GA aircraft with the prop turning.

That’s why this was such a cool opportunity. You normally wouldn’t go through the trouble of starting up an airplane and taxiing it around if you weren’t going to fly it. It had not even occurred to me to do it. But now we had a quiet ramp in a sleepy little corner of the airport. Plenty of room to taxi around and a gorgeous little taildragger in which to do it.

He didn’t have to offer twice. “Okay, guys, get in here and let’s taxi the airplane around a little.”

Cole started jumping up and down, saying “this is so cool!”

I got them in the back seat, buckled everybody in, ran through the startup checklist, and hit the starter button. The prop turned through about 20 blades and then the engine fired to life.

I looked over my shoulder and they were both smiling from ear to ear. Any worry that either of them would be scared by the noise or uncomfortable in the airplane melted away. All of that time pressed up against the fence in the front row at airshows over the last three or four years had paid off.

I ran all of the pre-taxi checks and then eased the throttle forward. Inertia gave way and we taxied happily around the ramp. I took it slow, but delighted both them and me by adding a little throttle and inside brake to swing the tailwheel around at each turn. Then we taxied back to the starting point and whirled the tail around in a tight 180 before shutting down. 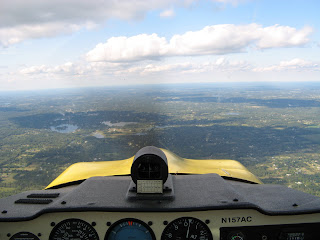 I’ll get the kids up sometime. There’s no hurry, really. It’ll happen when it happens. And it’ll happen after continued demonstration of my competence, skill, and judgment as a pilot when Mary’s comfortable with the idea. But, in the meantime, it’s a really good feeling to know that the kids are excited about it and it’ll be a big thing for them when it happens.

This is how it happens, folks. This is the magic of general aviation. The smell of 100LL, the sound of an engine, and the spark of imaginations on fire. Take your kids to the airport! I’ll see you there.
Posted by Stephen Force (Steve Tupper) at 9:32 AM

Congrats...I took my 7 year old son on his first flight a few weeks ago.

He is still grinning today.

Nice. My little nephew (4) loves coming to the airfield and "helped" me taxy our PA38 back to her parking spot last weekend. He can't wait to fly -- he's been in the back of the club 172 a few times but wants to be in the front seat now!

You can already see the grin...