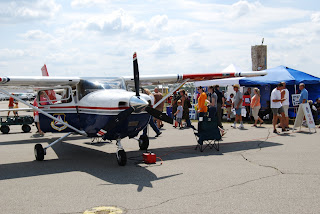 This is a regular blog post. Check out the other posts for links to show notes and show audio.

I was on duty all day with the Civil Air Patrol, mostly handing kids into and out of the CAP Cessna 182. It’s a new (303 hours) CAP aircraft with the G1000. I went to the ground school in January for the G1000, but haven’t flown the platform yet. Don’t know when I’m going to get some time to do it, but it would be really cool to fly a little more glass.

CAP members with at least a private certificate can train in this aircraft for $41/hour dry. That’s really outstanding, considering that you’d probably pay well in excess of $180/hour wet for something like this on the line at an FBO. 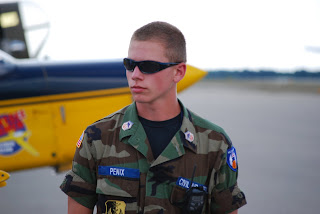 C/MSgt Penix manning the line. He was one of about 15 cadets that showed up at 10:00 on Saturday, trained all day, camped on the airport grounds Saturday night, and then worked the show all day on Sunday. The cadets are members of my squadron, the Oakland Composite Squadron (GLR-MI-238) (http://www.oaklandcomposite.org/). I’m really proud of the job they did.

Note that C/MSgt Penix has taken off his cover. We wore covers most of the day on the ramp, but took ‘em off whenever we were marshalling aircraft. You don’t want to be the cadet whose name is written in the cover that they pull put of the F-16’s engine. 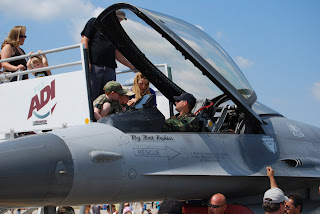 The Michigan ANG out of Selfridge ANGB sent Maj Matt Hopkins and his F-16 to the open house. Here, some kids get up close and personal with the fighter jet. 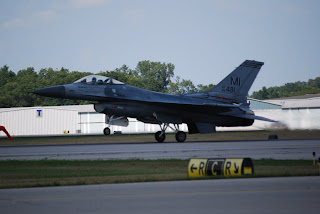 Maj Hopkins rotating for takeoff. Check out the exhaust stream behind the jet! The open house is a good opportunity to get really close to the aircraft, especially when they’re moving. The ropes are maybe 50 feet away from the edge of the taxiway and Runway 27L/9R is just a little past that. So you’re maybe 200 feet away from an F-16 on full afterburner.

Maj Hopkins did a couple of passes (one gear-down and one high-speed with a vertical pull) on departure. I got audio of that. We also had a fly-over by a pair of F-16s and an F-15 in trail and all three aircraft did a few low passes.

I hope the publicity for this is a lot better next year. I also hope that they pick some weekend other than the Woodward Dream Cruise weekend. It’s be nice to have more people out on the ramp coming to meet general aviation. I think that the airport community, and particularly the Civil Air Patrol, gave good account of itself and I hope we get bigger crowds next year.

Posted by Stephen Force (Steve Tupper) at 7:37 AM

Correction complete! (No disrespect intended for the C/MSgt! - Just my inability to decipher cadet grade!)

Actually..the previous commenter was incorrect, the grade is actually C/SMSgt...