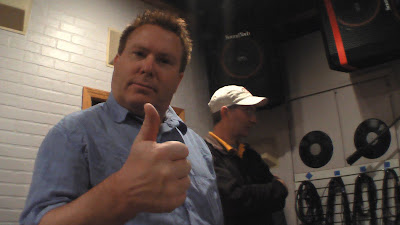 This is a regular blog post. Looking for show notes or links to show audio or video? Keep on browsing. They’re all here!

On Friday, Barry (“Bernie”) Sutton and Don (“Seawall”) Weaver and I went into The Soundscape Recording Studio in Royal Oak, Michigan to do some work on the soundtrack for the upcoming independent film, Acro Camp. (Check out http://www.acrocamp.com/.)

This is a continuation in part of the crowdsourcing of Acro Grass, the bluegrass-flavored basic theme that we’re using for the film. We walked in with two versions of the tune. The first is the same version that I put out there earlier this year for people to use as a backing track for contributions. It’s an acounstic riff in D at 116 bpm. The second is an electrified version, also in D at 106 bpm with the electric guitar mostly clean and with a 563 ms delay to sound a lot like The Edge (guitarist for U2). Lastly, I did a very basic riff in 3/4 that, if you don’t play a G# or other notes that would capture it into a specific key, lacks a tonal center and is both cool and annoying for the same reason. 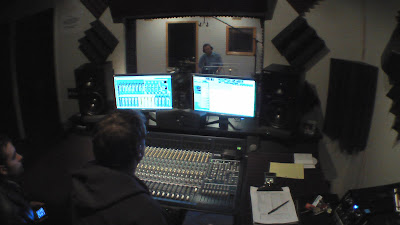 I sent Don and Barry links to just the basic tracks in MP3 form the week before and let them listen to them prior to coming into the studio. Uncharacteristically, that was the extent of my actual musical performance. I didn’t play anything in the studio. The idea for the session was to capture Barry and Don’s performances.

I brought in my drum kit and Tim (the engineer) supplemented it with a nice Sabian cymbal (I want to say that it was a 16” or 18” V Crash from the Vault series – Very nice as a ride, crash, bell, or otherwise with a lot of different sounds depending on how you whack it) and his vintage floor tom.
Don brought in his keyboard kit, which consists of both a really nice fully-weighted keyboard with lots of internal voices and an external box with yet more voices. The piano sound modeling is excellent. 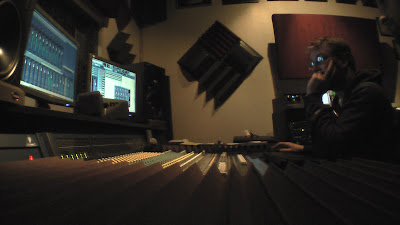 The session started with Don and Barry just jamming together to the acoustic version of Acro Grass. I synched up one camera run so that I can put the actual board mix together with the video and use it for an extra on the DVD. Mostly floating the camera around the room. I’ll just run it continuously and intersperse footage from the camp for the parts where I’m moving the studio camera around in between float and other shots.

Once Barry and Don did the initial jam, we went to actually recording. We did them one at a time with each of them playing ideas over the courts of one or two ten-minute takes. It took about four hours, including tech setup, to get everything down for three different basic themes.

Now the drill is for Tim to bounce everything down to individual WAV tracks and shoot them to me on a data DVD. Then I’ll take them all and listen to them to pull out the parts that I like to create a sort of library of Barry and Don’s best themes, bits, and pieces. I’ll them put those in where they seem best and come up maybe a half-dozen variants of each theme to drop into the film at appropriate times. I’ll probably also add in some guitar, mando, banjo, shuttle-pipe, and other stuff as the mood moves me.

And that’s to say nothing of the music that podcast fans have been contributing over the last few months for the original Acro Grass theme. 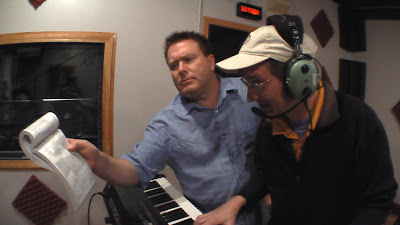 Bottom line, I have enough raw stuff captured now (video, audio, and music) for the entire film. All else is gravy and improvement. And it also means that I have a boatload of both audio and video editing to do if I want this thing to be released in the spring in time to do Acro Camp II, as I’ve tentatively planned.

The studio session was a complete gas. It was Barry’s first time in a studio environment. Don is an old hand at recording and has played on several album projects. Both of them really seemed to enjoy it. It was my first time in a studio session in which I didn’t actually play and just functioned as producer. Much as I like to play, it was a good experience for me just managing artists and getting good performances out of them. And Tim is quintessentially pro as always, bringing his musical sensibilities and technical expertise together to support a truly organic process.

Luck is the meeting of preparation with opportunity. Both converged in good measure at The Soundscape last night. I’m very lucky.
Posted by Stephen Force (Steve Tupper) at 3:09 PM